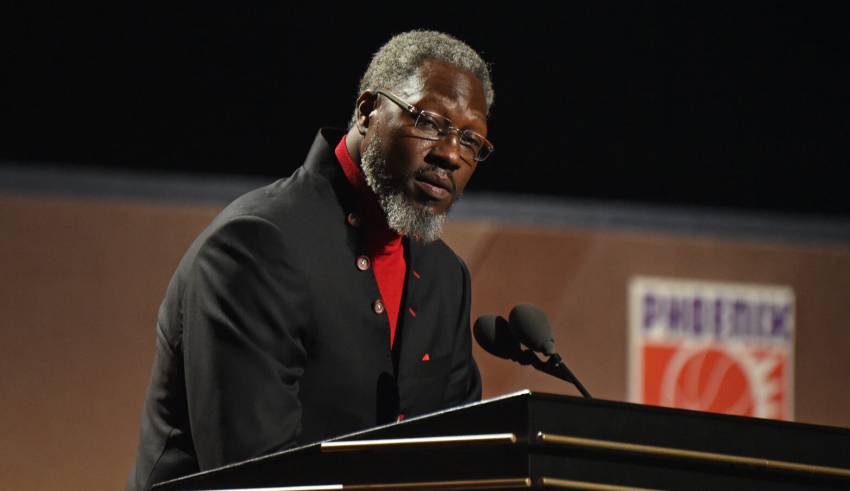 Ben Wallace speaks during the 2021 Basketball Hall of Fame Enshrinement Ceremony on September 11, 2021.

SPRINGFIELD, Mass. — At the Naismith Memorial Basketball Hall of Fame’s 2021 Enshrinement, which took place Saturday night on the 20th anniversary of the Sept. 11th attacks, a graphic of the New York skyline kept a vigil, start to finish, over the proceedings.

Maybe that’s why so many of the acceptance speeches seemed just a little more humble, expressing a bit more gratitude, with more than a few references to — as newly inducted Bobby Dandridge put it — “the God of my understanding.”

All of it was on display: Laughter, tears, pride, nostalgia, shout-outs and more, layered onto what already was an emotional, pensive day for so many in the arena, watching from home or neither.

Then again, with a Class of 2021 that the folks at the Hall billed as the biggest ever — 16 individual honorees — it probably was inevitable that most of the raw-human-emotion buttons would get pushed.

The most new Hall of Famers in a single night made for arguably the longest ceremony in recent memory, too, running about three-and-a-half hours. Most of them blew past the digital countdown clock in their special moments, and the spectators seemed not to mind.

The most unique speech of the night came from Ben Wallace, the four-time NBA Defensive Player of the Year and a driving force of Detroit’s 2004 championship. Wallace is the only undrafted NBA player — his name never was called in 1996 when he came out of the Virginia Union — to still wind up in the Hall.

Wallace didn’t even use the teleprompter, his words an amalgam of affirmations and free association. They focused on his underdog life, being the 10th of 11 kids growing up poor in rural Alabama, underestimated at every level along the way, and yet outplaying the great Shaquille O’Neal in the clincher for an NBA title.

“Legacies are built to last. But what type of legacy are you building? What potential legacy? I’ll tell you my legacy: I wasn’t welcome. I was too small. I couldn’t play the game the way they wanted me to play the game. Sound like an uneven game to me. Put me on a level playing field, and I’ll show you.”

Wallace raised one fist high, proclaimed “Panthers march!” and did just that, off the stage and back into the crowd. A few inductees later, he came back for the extremely rare Hall speech encore, sharing a few more thoughts about his legacy.

Probably the most poignant moment of the evening focused on Bill Russell, the legendary Celtics center who was inducted Saturday as a coach. Russell, who was a no-brainer selection as a player back in 1975, joined Tom Heinsohn, Bill Sharman and Lenny Wilkens as the only NBA participants honored for both roles.

Former President Barack Obama congratulates Bill Russell on his induction into the Naismith Memorial Basketball Hall of Fame as a head coach.

Russell took over in Boston when Red Auerbach stepped down, serving as player-coach for his three final season and extending the Celtics dynasty with championships in 1968 and 1969.

Former President Barack Obama introduced Russell’s portion of the program via video. Russell, 87, was present but recorded his comments that played over the large screens at the event. A bevy of Hall of Famers — Charles Barkley, Julius Erving, Alonzo Mourning, Spencer Haywood and Bill Walton — stood with Russell as his presenters for this second enshrinement.

There were other highlights from the newly elected with NBA roots, including:

• Chris Webber expressed some extended, heartfelt appreciation to his presenters, Barkley and Isiah Thomas. He recalled Thomas, a Pistons hero to Webber growing up in Detroit, coming to visit him and ultimately his whole neighborhood full of kids in his pre-“Fab Five” days. Barkley got Webber’s gratitude for innovating both as a power forward and as an athlete-turned-commentator unafraid to speak his mind.

• Longtime coach Rick Adelman shared that he had a rough time finding work as a high school coach after playing seven NBA seasons because he “didn’t have any experience.” He started out at a small college in Oregon, and only got into the NBA when Portland coach Jack Ramsay — who had been keeping an eye on Adelman — needed an assistant in 1983.

• Dandridge, sometimes considered to be a temperamental player during his career with Milwaukee and Washington, explained why he came across as “angry.” “You don’t look forward to guarding Connie Hawkins, Elgin Baylor, Rick Barry, all in a period of four days,” Dandridge said. “There was no such thing then as ‘time management’ or whatever you call it.” And he got a laugh from the crowd as well as his presenter, Oscar Robertson, when he said: “Isiah Thomas told me, ‘You are the only person Oscar has said is his friend.’”

• Paul Pierce, probably the honoree with the most fans in the building owing to the proximity to Boston, made sure to thank the nine teams that passed on him when he surprisingly slid to No. 10 in the 1998 Draft.

Paul Pierce thanks teams that passed on him during his 2021 Hall of Fame speech.

• Chris Bosh, the former Toronto and Miami All-Star forward, teased himself about being quick to cry in frustration over losses, from his frequent habit in high school or his YouTubed moment after the Heat lost in the 2011 Finals.