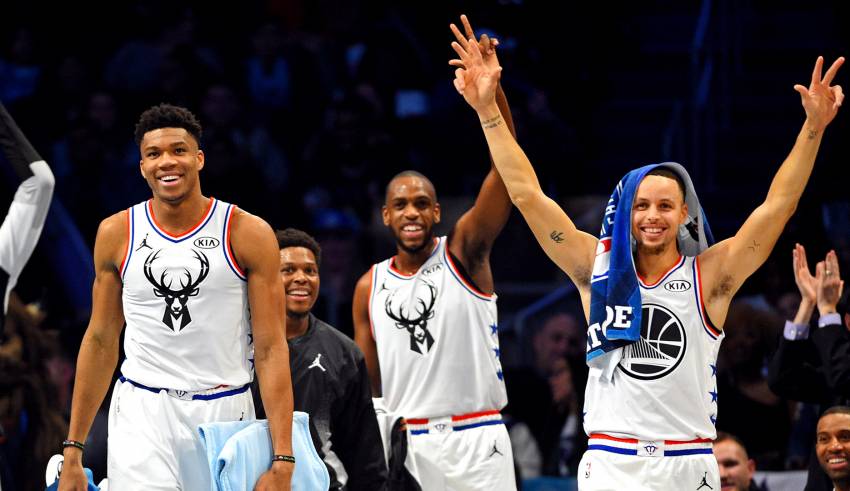 For five years, Steph Curry and the Warriors ran roughshod over the NBA, reaching five consecutive NBA Finals and putting together the league’s greatest regular season ever with 73 wins in 2016.

The 2019-20 season has not gone quite the same for Golden State, as Curry remains out since suffering a broken hand on Oct. 30, while the Warriors now own the league’s worst record at the All-Star break.

It’s safe to say players around the NBA haven’t exactly sympathized with the organization’s precipitous downturn.

Giannis on Steph Curry: “Let me be honest with you. The players, we kind of enjoy that he’s not playing — not enjoy that he’s hurt. We want him to be healthy, but he just makes it way, way tougher for the rest of the league.”

“Let me be honest with you,” Giannis told reporters during NBA All-Star Weekend in Chicago. “The players, we kind of enjoy that he’s not playing — not enjoy that he’s hurt. We want him to be healthy, but he just makes it way, way tougher for the rest of the league.”

[RELATED: Iguodala opens up about Steph defending him on social media]

It’s not the first time players have publicly stated their appreciation for the Warriors no longer being the unstoppable force they became in the 2010s.

The guard definitely has made life more difficult for defenders over the years, as Curry owns four first-team All-Pro honors as well as the most 3-point field goals among active NBA players.

Curry reportedly is aiming to return to the court in early March and given the Mar. 14 matchup in Milwaukee between his Bucks and the Warriors, Antetokounmpo’s reprieve from facing the two-time MVP might not last much longer.

If you had a dollar every time someone compared Steph Curry to Trae Young, you’d have a lot of dollars.

It’s an obvious comparison. The Warriors star and the face of the Atlanta Hawks are electric, undersized point guards who can drain shots from just about anywhere on the court.

Young surely has heard of the similarities countless times, but that doesn’t mean he minds the reminder.

“Who wouldn’t want to be compared to MVP and a guy like that,” the 21-year-old told reporters Friday ahead of the NBA Rising Stars Challenge. “I don’t necessarily get into all that. I don’t mind it. I’m glad I’m getting compared to a guy like him than somebody else. It’s not a bad thing.”

Curry has missed all but four games this season after breaking his left hand a day before Halloween. The two-time MVP will be re-evaluated March 1, and he’ll return to the court soon after.

Portland Trail Blazers star Damian Lillard arguably has seized the reigns as the NBA’s most ridiculous shot-maker in Curry’s absence — seriously, just look at the Oakland native’s game logs since the start of 2020 — but Young isn’t far behind. Young is averaging 29.7 points per game and making 36.9 percent of his 3-point shots.

He’s not quite Curry, of course. The three-time NBA champion has never shot worse than 40 percent from deep in a season in which he played at least 50 games. Curry could retire today as the NBA’s fifth-most proficient 3-point shooter (43.5 percent), while Young didn’t even cross the 40 percent threshold in his one year at the University of Oklahoma.

Young’s cabinets are missing the hardware that fills Curry’s, too. But being mentioned in the same breath at this point in his career? That’s more than enough for Young right now.

Eric Paschall was one of a handful of players in the 2020 NBA Rising Stars Challenge who wasn’t drafted in the first round, but the Warriors rookie looked right at home Friday night in Chicago.

Paschall scored a team-high 23 points on 10-of-13 shooting in Team USA’s 151-131 comeback win over Team World. Defense was optional at the United Center, but the Villanova product finished the night plus-33 alongside the rest of the Team USA reserves.

The 23-year-old flashed his offensive versatility Friday night, getting buckets in traffic and from beyond the 3-point line.

DOUBLE 👏 CLUTCH 👏@epaschall is currently leading all #NBARisingStars in scoring.

hand him the MVP now pic.twitter.com/rFzs1uoLEX

Paschall saved his highest flying for the fourth quarter, getting plenty of hang time on an uncontested two-handed slam.

You’ll have to look elsewhere for outrage that Paschall wasn’t the game’s most valuable player, despite leading his team in scoring. Charlotte Hornets forward Miles Bridges, Paschall’s teammate on the night, won MVP honors.

Something tells me few people will remember that as more than a footnote. The night unsurprisingly belonged to New Orleans Pelicans rookie Zion Williamson.

Yes, he scored only 14 points, but bending the rim on a dunk was more than enough to steal the show.

[RELATED: Why Jazz star Mitchell respects Warriors’ Lee so much]

The lottery-bound Warriors haven’t had much to smile about this season, but Paschall has been an exception. He’s averaging 13.2 points, 4.7 rebounds and 1.7 assists as a rookie, and his Rising Stars nod was well-deserved.