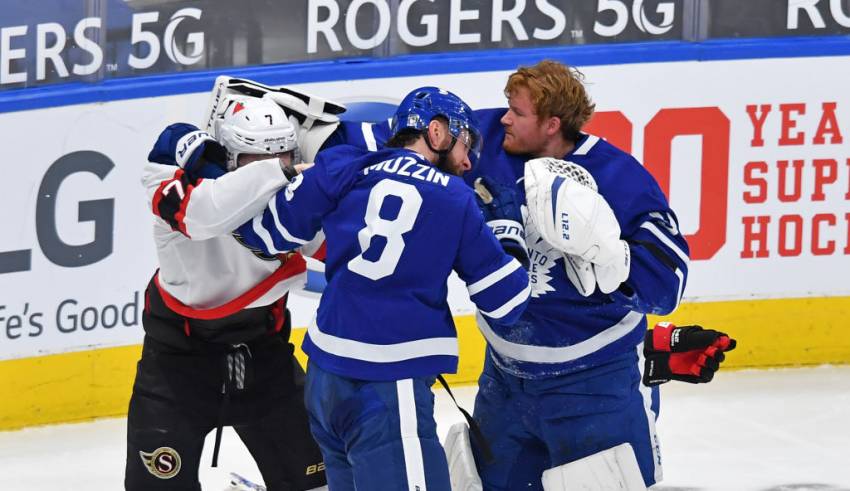 Barry Trotz tuned his television to the game between the New York Rangers and Philadelphia Flyers to do a little scouting, flipping around to others outside the East Division just to check some scores and move on.

“I really haven’t focused in on the other divisions, really,” the New York Islanders coach said. “I probably focus 80- or 90% just our division and the teams within it.”

Trotz is able to do that because it’s all divisional play this season, an effort by the NHL to reduce travel in the pandemic and make virus-forced schedule changes easier to pull off.

One side effect: Distinctively different styles developing around the league. The North Division is star-studded and high-scoring; the East is tight and full of rivals that know each other well; the West is the most tightly bunched in the standings at the moment, big and heavy with teams pushing each other around. The Central is a mishmash of opponents who haven’t seen each other much and tend to wind up in games that look like track meets.

With 56 games and the first two rounds of playoffs all within the same division, each one is starting to show its own personality.

A quarter of the way through the season, the NHL is averaging 5.9 goals per game. In the North Division, that number climbs to 6.4; for context, the last time league-wide scoring was that high was 1993-94.

Six of the league’s top eight scorers play in the North. There’s Edmonton’s Connor McDavid and reigning MVP Leon Draisaitl, Toronto’s Auston Matthews and Mitch Marner, Winnipeg’s Mark Scheifele and Vancouver’s Brock Boeser. And that’s just the start of the star power among the seven teams, all of them based in Canada.

Maybe driving coaches a little crazy, too. Winnipeg’s Paul Maurice never feels in control of a game behind the bench in the North Division, though that doesn’t mean he doesn’t enjoy it and try to capitalize on the offensive talent of some Jets players.

“I like the offensive part of the game,” Maurice said. “I like watching it. Where the coaches try to fit himself in in the Canadian Division is in the transition. All of these guys have let their team make plays. If a guy turns the puck over and I see what he’s trying to do, if there was a method to it, if there was a rightness to it — pucks are going to get turned over, you can live with that.”

Oh, pucks are getting turned over, all right: The seven teams in the North are all in the top eight in giveaways, so it’s no surprise the division has five of the top six scoring teams in the league.

Games in the East have been tied or within a goal over 80% of the time, with more than a third going to overtime. Geographically, the teams are closer than any other division, and the play is super tight because they know each other so well.

“There’s a lot of parity in the East, and so as a result there’s going to be a lot of close games,” Pittsburgh coach Mike Sullivan said. “Maybe it’s a combination of the parity in the league plus the familiarity by playing teams a number of times, and so teams get familiar with each other and their tendencies and their tactics.”

Boston and Philadelphia like to lock down opponents, Washington can do it, and Trotz’s Islanders thrive in grind-it-out games. The top five teams in the standings were separated by three points through Wednesday.

The Western Conference over the past couple of decades developed a bigger, heavier style of game. The Los Angeles Kings and St. Louis Blues used that to their advantage on Stanley Cup runs.

It’s just the West Division now, but the style hasn’t changed. Players in the West weigh in at an average of over 6-foot-1 and 200 pounds, and they’re not afraid to throw their weight around, to the tune of almost 3,000 hits through 71 games.

The Avalanche are a bit of an exception to that, but even they’ve bulked up in recent seasons.

“Why Vegas and Colorado are so good is they can kind of do both — they can play that physical, grinding style, but then they also can turn it up several notches and play really fast and really skilled,” Johnson said.

What happens when you throw the two teams from the 2020 Stanley Cup Final, a couple from the Metropolitan Division and a few from the Western Conference together? It’s complicated, plus no division has been upended more by game postponements than the Central.

“It still feels kind of a newness to a lot of the teams,” Carolina coach Rod Brind’Amour said. “Where when you’re in the other division, you just knew the teams because you played them so much.”

Brind’Amour said “it’s a tough night every night” but in a more wide-open way than the East. First-place Florida put up 29 shots in a single period against Cup runner-up Dallas this week but thanks to good goaltending only got two goals out of it.

“Fast games, high-event games, lots of back and forth,” Johnson said. “It just feels like it’s a track meet in the Central.”