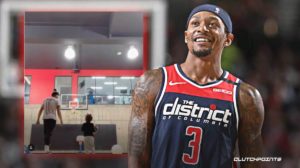 Throughout NBA history, we’ve seen a lot of superstar team-ups that have brought a ton of excitement to the league. Although these team-ups usually come to an end, reunions between these team-ups are not far from impossible.

These reunions are an added excitement for fans, given that they offer a lot of throwback moments when two stars come together for another time. Furthermore, it allows fans another opportunity to witness two stars achieve more greatness together before it finally comes to an end.

In this piece, let’s take a look at the five most memorable superstar reunions in the NBA.

Kawhi Leonard and Serge Ibaka first teamed up when they both suited up for the Toronto Raptors. The duo helped gave the Raptors franchise its very first NBA championship, when they pulled an upset against the Golden State Warriors in the 2019 NBA Finals.

As history unfolded, Leonard left the Raptors after his lone championship stint with them for the Los Angeles Clippers. Fortunately, Ibaka would soon follow suit after a season by signing a two year, $19 million deal with the Clippers during 2020 Free Agency which made the reunion happen. According to Bleacher Report, Leonard played a key role in recruiting the Congolese-Spanish defensive big man to join him in Los Angeles.

With Ibaka’s interior defense and versatility on offense alongside Leonard’s star power, there is no question that this championship duo will be able to help the franchise make another deep playoff run this year after a disappointing exit in the Western Conference Semifinals last year against the Denver Nuggets.

James Harden and Russell Westbrook first played together with the Oklahoma City Thunder, with both players still years away from becoming MVP caliber players at that time. But despite this, this duo was still responsible for helping the Thunder finish as runner-ups in the 2012 NBA Finals which is no easy feat.

Of course, Harden eventually made his leap to superstardom when he moved to Houston in 2012. Then later on in 2019, Westbrook would join The Beard via a trade that sent Chris Paul to the Thunder in exchange for the 2017 MVP. With both players reuniting after seven years, it was definitely an exciting moment for basketball fans given that both players have now teamed up together once again after evolving into MVPs.

Unfortunately, this reunion wasn’t really productive. Westbrook and Harden could only take the Rockets to the second round, as they were eliminated by the hands of LeBron James and the Los Angeles Lakers in five games. Furthermore, the duo had an ugly break-up that saw Westbrook growing irate over Harden’s approach of running the team culture wise. The 6’3 guard was eventually shipped to the Washington Wizards which ended this reunion just after one season with the Rockets.

The Orlando Magic were a fierce team in the 1990’s with Shaquille O’Neal and Penny Hardaway leading the way, as they took the franchise to deep playoff runs that included a NBA Finals appearance in 1995. In fact, this duo averaged almost 48 points per game in their three seasons together.

As we all know, this duo also brought a lot of what-ifs given how Shaq eventually left the Magic for the Lakers and started a dominant three-peat dynasty. On the other hand, while staying with the Magic, Hardaway evolved into a superstar during his prime that made Orlando a playoff contender.

Fortunately, basketball fans got another look of this duo when Hardaway came out of retirement to reunite with Shaq in Miami for the 2007-2008 season. Although O’Neal was still a reliable big man who won a championship in 2006, Penny just was no longer the same as he was slowed down by knee injuries and a one year lay-off that only allowed him to muster 3.8 points, 2.2 rebounds, and 2.2 dimes per game in his final season in the NBA.

But nevertheless, it was still a great reunion that allowed fans to have one last look at this All-Star duo.

Another star studded reunion that happened in recent memory is LeBron James and Dwyane Wade. This duo was a force to be reckoned with during their days in South Beach where they formed the Big Three alongside Chris Bosh. With James and Wade, Miami was able to win two straight NBA championships, while making the NBA Finals on four straight occasions. More often than not, James and Wade electrified arenas with their athletic plays that certainly made the Heat difficult to stop, especially in transition.

Although the Big Three era came to an end in 2014, James and Wade eventually saw themselves on the same team again in 2017. With Kyrie Irving leaving for Boston, the Cavs were looking for another star to compliment James. Thus, completing the reunion between Wade and James.

Although James and Wade showed flashes of their great chemistry together, the roster turned out to be a complete mess despite the number of veterans in the team that also had Kevin Love, Isaiah Thomas, and former MVP Derrick Rose.

As a result, the reunion only lasted for 46 games before Wade was traded back to Miami which was part of the Cavs’ mid -season roster shakeup. It would’ve been great for Wade to have stayed with the Cavs, given that he didn’t want to be traded. To make matters worse, it certainly robbed basketball fans from seeing LBJ and D-Wade win a third championship together. LBJ, of course, led the Cavs to another Finals stint that season before getting swept by Kevin Durant and the Golden State Warriors.

But despite the very short reunion, it was no doubt a great sight to see arguably the greatest duo in NBA history to team up one last time in Cleveland.

After questionable moves by James Harden in the offseason that includes his absence in the team’s training camp while violating COVID protocols, the Rockets finally gave in to their disgruntled star’s wishes. As we all know, The Beard wanted out of Houston to play for a championship team.

According to Harden in a postgame interview, he said “We’re just not good enough. We don’t, obviously chemistry, talent-wise, just everything – and it was clear these last few games… I love this city. I literally have done everything that I can. I mean, this situation is crazy. It’s something that I don’t think can be fixed.”

With a blockbuster trade completed by the Houston Rockets, Brooklyn Nets, Indiana Pacers, and Cleveland Cavaliers, Harden is now headed to the Brooklyn Nets to reunite with his former Thunder teammate in Kevin Durant after nine years. Durant and Harden were two of the crucial players responsible for bringing Oklahoma CIty Thunder to the NBA Finals in 2012.

However, things are relatively different now, given that Harden is no longer a Sixth Man but rather a superstar that has the ability to become the face of a franchise. Furthermore, with Kyrie Irving also on board, it will be interesting to see how this reunion will turn out given that these three superstars love having the ball in their hands. But more importantly, there will certainly be questions regarding ego, leadership, and character for this reunion to work.

With three of the major scorers in the league playing together for Brooklyn, there is no doubt that they are immediately a championship caliber team, at least on paper. However, we all know that putting the best talents together doesn’t always result into a championship. But nevertheless, a team-up between Durant and an improved James Harden alongside Irving will certainly put other NBA teams on notice. Furthermore, it’ll be interesting to see how this star-studded reunion will turn out especially against championship caliber teams such as the defending champions Los Angeles Lakers and Eastern Conference Rivals the Miami Heat and Boston Celtics.