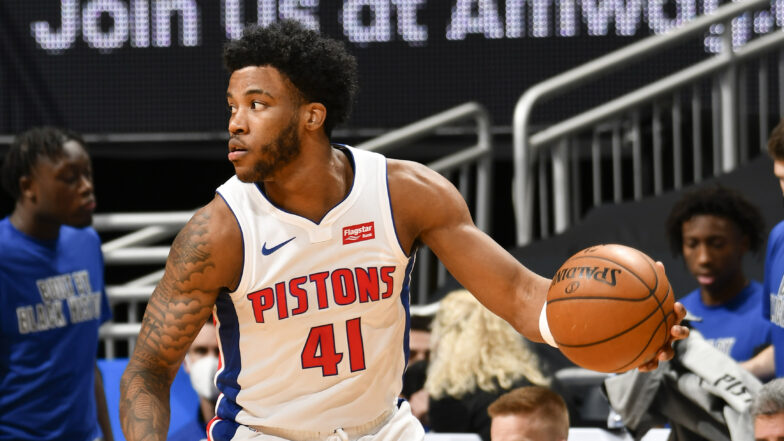 Over the last seven games, Saddiq Bey has been a top-55 player.

In this weekly piece, FantasyPros highlights some players who may be available on your waiver wires. The Yahoo database will be utilized, and only players rostered in less than 50% of leagues will be mentioned.

T. J. McConnell (PG/SG – IND): 44% rostered
Man, what’s a guy have to do to get some respect in the fantasy streets? I left that sentence in from last week’s piece. His roster percentage only went up eight percent. People don’t need assists and defensive stats? UPDATE: I haven’t edited the first sentence in three weeks. The roster percentage increased five percent from last week, so one or two more weeks, and hopefully I won’t have to write him up anymore. It’s madness, I tell ya! Over the last five games, McConnell has been a top-50 player. He’s averaged 33.6 minutes, 11.4 points, 4.2 rebounds, 6.2 assists, two steals, and 0.8 blocks. 0.8 blocks!

Danny Green (SG/SF – PHI): 25% rostered
Green is the antithesis of fantasy sexy, but over the last four games, he’s been a top-25 player! Crazy, I know. He’s been averaging four steals per game. That’s obviously not the New World Order. Green is more like a top 100-ish player who can provide 3-pointers, some rebounds, and defensive stats. The shooting efficiency is always an issue, though, as he’s converting 40% of his attempts on the season.

Derrick Jones Jr. (SG/SF – POR): 30% rostered
If you’re looking for offense, there’s nothing to see here. That said, Jones has been shooting 63% from the field, good for 11.4 points per game over the last seven games. Jones is a rebounds and defensive stat-stuffer who will also provide some 3-pointers. Over that seven-game span, he has averaged one 3-pointer, 6.1 rebounds, 0.6 steals, and two blocks per game.

Malik Monk (PG/SG – CHA): 28% rostered
Monk has been on quite the heater recently. Over the last three games, he garnered a 30.7 usage rate and averaged 24.7 points, 4.7 3-pointers, 4.3 rebounds, and 1.3 assists while shooting 53% from the field in 25.8 minutes. He’s been benefitting from injuries and the shooting efficiency will regress, but chant with Monk for as long as it lasts.

Dennis Smith Jr. (PG  – DET): 17% rostered
Smith Jr. has started the last four games, and he played 27 and 26 minutes in the last two. His usage rate has been 23 and 20, and he’s contributed double-digit points with six and seven assists. The shooting efficiency is always a concern with Smith Jr., as he’s shooting 38% from the field on the season. The turnover rate is very low and he does contribute some defensive stats. Most importantly, he has the faith of Dwane Casey, at least for now. When Killian Hayes returns to action, Smith Jr. will likely go back to the bench, but enjoy the roller coaster ride for now.

Jalen Brunson (PG/SG – DAL):25% rostered
Over the last seven games, Brunson has played 30, 23, 34, 28, 30, 23, and 27 minutes, despite not starting at all. He’s scored double figures in every one of the games and contributed a little something in every category but blocks. He has kept the turnovers low (1.5) while maintaining excellent percentages (54% from the field and 81% from the line).

Jakob Poeltl (C – SAS): 47% rostered
Poeltl has started the last eight games, including the most recent two with LaMarcus Aldridge in the lineup. He has averaged over 30 minutes per game and has played 35 and 25 in the two games with Aldridge. There is some uncertainty as to how it all plays out going forward, but for now, the two will likely play alongside each other. As a result, Poeltl should continue to be an excellent source of rebounds and blocks. Over the last 11 games, he has averaged 8.8 rebounds with 2.5 blocks.