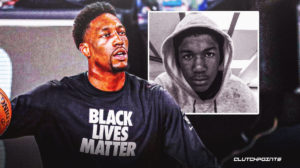 Draymond Green has had to improve his conditioning this season with the Golden State Warriors after dealing with issues from COVID-19 before the season began. During a recent interview, Green spoke about players being out of shape amid the pandemic and some believe he is singling out Anthony Davis.

“I won’t throw anybody under the bus, but I’m talking about one superstar particularly who I’ve never seen him out of shape. He’s so out of shape right now. It’s not Luka (Doncic) or James Harden but I’ve never seen this guy out of shape and actually when we played, he was like ‘man, the bubble’ like sh*t’s been hard and I completely understand that. It’s brutal. This season has been extremely tough. An NBA day normally is like maybe four to six hours; every day right now is like 10 to 12 hours.”

After Green’s interesting comments, users on the NBA Reddit immediately insinuated that Green was speaking about Davis. The All-Star forward for the Los Angeles Lakers has gotten off to an alarmingly slow start this season.

On top of that, Davis is shooting a career-worst 70.1 percent from the free-throw line and he doesn’t look fully engaged on the defensive end yet. Of course, the Lakers won the NBA title just two months before the season began, giving Los Angeles a short amount of time to get their bodies prepared for this season.

Draymond Green has had his own struggles with conditioning this season as he was unable to partake in training camp with the Warriors. While some people are attempting to claim Green is taking a shot at someone — some believe it is Davis — he’s making it clear that remaining focused on the season has been tough amid the pandemic and other issues at hand.