January 17, 2022
Trending
Home NFL Divisional Round: What we learned from Saturday's games – NFL.com 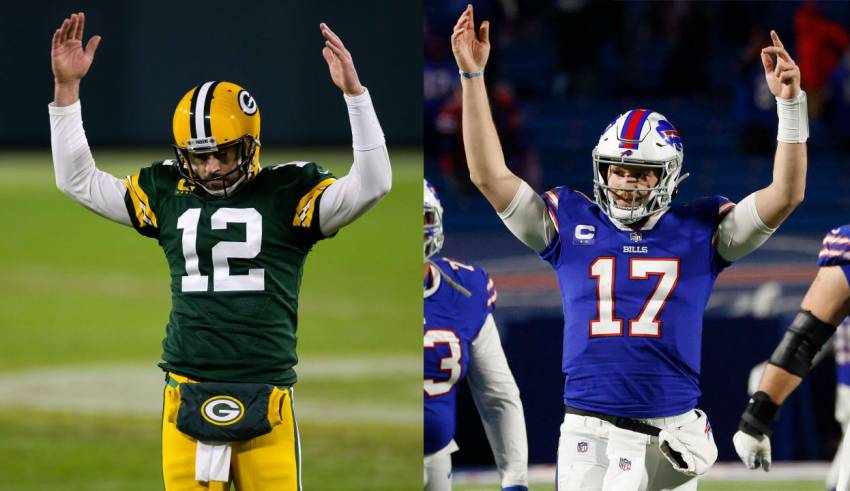 Here’s what we learned from Saturday’s Divisional Round doubleheader.

1) Great offense beats great defense. The Green Bay Packers offense steamrolled the NFL’s No. 1-ranked defense. The Rams D had smothered opponents all season by inviting them to run, avoiding giving up the big plays and daring offenses to dink and dunk their way down the field, betting most offenses would get impatient. Most can’t play that style. ﻿Aaron Rodgers﻿ can. The QB was content to be patient early, leaning on the run game and picking apart L.A. underneath by hitting his outlets. The MVP frontrunner wasn’t crisp early, but every time the Rams threatened, Rodgers made a dynamic throw under pressure, showing his superior pocket presence. Green Bay leaned on a mauling offense line to create creases, and the run game gobbled up yards. The three-headed backfield of ﻿Aaron Jones﻿ (14/99/1), ﻿Jamaal Williams﻿ (12/65) and ﻿A.J. Dillon﻿ (6/27) racked up 99 rushing yards. Out of the half, Jones dashed for a 60-yard run up the gut on the first play of a 75-yard TD drive with all those yards coming on the ground. Green Bay scored on each of its first five possessions and gobbled up 484 total yards against a Rams defense that had given up 300-plus total yards just six times this season, with a high of 390. With L.A. making a close game of it, Rodgers finally took his shot, hitting ﻿Allen Lazard﻿ on a 58-yard TD bomb to seal the contest. It was a beautiful, balanced offensive performance by the NFC’s No. 1 seed.

2) ﻿Aaron Donald﻿ clearly wasn’t 100%. The perennial AP Defensive Player of the Year candidate insisted all week that the rib cartilage tear suffered last week wouldn’t be a factor Saturday. It was. Donald played 39 of 72 snaps, 54.2%, well below the average of a player who usually hovered between 80-90% of snaps played. More importantly, the DT wasn’t the game-wrecking beast we’re used to seeing. He finished with one tackle and a single pressure, with zero QB hits. Packers guard ﻿Elgton Jenkins﻿ did a great job on Donald. With the beast not himself, the rest of the Rams defense was exposed. Rodgers wasn’t sacked at all and L.A. managed just one QB hit. Give a HOF QB that much time and no secondary will hold up. The Rams defense was walled out by the Packers O-line, earning just a single tackle for loss. It didn’t help that L.A. missed on several opportunities, including back-to-back chances for INTs at the end of the first half and a forced fumble that popped right back to Rodgers. Entering the contest, the Rams D needed to carry the load against Rodgers and Co. With the best defender in the NFL not himself, L.A.’s defense got stampeded.

3) Jared Goff﻿ is less than three weeks removed from surgery on his throwing-hand thumb. Last week, the QB’s passes fluttered and lacked zip. Saturday at Lambeau Field, Goff had much better velocity, particularly over the middle of the field. The QB kept the Rams in the game until late by making a bevy of throws and avoiding the big mistake. He finished 21-of-27 for 174 yards and a TD. L.A. leaned on rookie ﻿Cam Akers﻿, who responded, averaging 5.0 yards per carry on 18 totes for 90 yards and a score. The rookie’s superior vision, cutting ability and power to plow through tackles allows him to gain extra yards. Having employed the Wildcat formation just once before in his tenure as Rams coach, McVay used the direct snap to Akers a handful of times, one resulting in a TD. Despite Goff playing better than expected and Akers looking good, the Rams offense was much too inefficient to keep up with Rodgers. L.A. alternated three scoring drives with three three-and-outs through the first three quarters, while Goff took four sacks on the day. Credit the Packers defensive front with causing havoc, particularly ﻿Kenny Clark﻿ (1.5 sacks) who seemed to live in the backfield.

1) The Divisional Round brought us a matchup sure to be a barn-burner Saturday night, with two of the NFL’s hottest teams clashing in western New York. Both ditched defensive tendency, leading to a slog of a first half in which each offense used the majority of the first two quarters to figure out what these defenses were doing while producing a combined total net yardage of 294 and converting just 4-of-12 third-down attempts. Buffalo’s change in approach came in its blitz frequency. Defensive coordinator Leslie Frazier bought into bringing the heat from the beginning, posting a blitz rate of 41.5% (per Next Gen Stats), a mark that finished well above Buffalo’s typical rate of 35% and was over 50% at one point late in the second quarter. Baltimore chose to do the opposite, blitzing on just 25.6% of Josh Allen drop-backs. Buffalo also committed to matching Baltimore’s two-back attack, going with a base personnel grouping on all 20 of Baltimore’s two-back plays in the first half, a massive reversal of tendency (Buffalo only used base personnel on 6 percent of defensive plays in the regular season). Each team struggled to find a rhythm as a result, making for a low-scoring affair and a 3-3 tie headed into the half.

2) The massive commitment to the blitz paid off for the Bills throughout the night, forcing the Ravens to find a different path to offensive success and shutting down Baltimore in the game’s most important sequence. Facing second and goal from Buffalo’s 9-yard line, ﻿Lamar Jackson﻿ dropped to pass as the Bills rushed six. ﻿Jerry Hughes﻿ shot through the C gap on the right side as Baltimore’s line slid its protection to the left, leaving rookie running back ﻿J.K. Dobbins﻿ alone to pick up the blitz. Dobbins whiffed and Hughes ended up in Jackson’s face, forcing the quarterback to fling a pass short of ﻿Marquise Brown﻿, who was wide open near the goal line. The very next play, Buffalo sent a base rush of four, giving Jackson time to survey and lock onto tight end ﻿Mark Andrews﻿, who appeared to be open in Buffalo’s Cover 2 zone defense. Jackson never saw nearby defender ﻿Taron Johnson﻿, though, and the defensive back slipped under the pass, intercepted it and returned it 101 yards for a decisive pick-six, rocketing Buffalo’s win probability from 63 to 93% in one play. Buffalo finds itself in a 10-10 tie a play earlier if not for the Hughes pressure, a prime example of the effectiveness of Frazier’s game plan Saturday night. The increased heat harassed Jackson frequently (posting a pressure rate of 36.6%) and limited Dobbins and ﻿Gus Edwards﻿ to 84 combined rushing yards on 20 carries. The blitz won the Bills a playoff game, plain and simple.

3) The Ravens hit the field in Buffalo and never quite looked comfortable or like themselves on Saturday night. ﻿Justin Tucker﻿ missed two of his three field-goal attempts, clanging each of his first two tries off opposite uprights. Ravens pass-catchers morphed into their late-season Pittsburgh counterparts, dropping multiple targets and failing to make contested catches, and Jackson averaged just 3.8 yards per rushing attempt, gaining 15 of his 34 total yards in one run. The same was true of Edwards, who gained 22 of his 42 yards on his first two carries to start the game, and Dobbins dropped two passes while also failing to pick up Hughes’ blitz in a spot that proved crucial. The usually resilient Ravens melted down at the end of the third quarter, starting with Jackson’s pick-six and continuing with a botched snap that saw Jackson penalized for intentional grounding and forced out of the game due to a concussion. And speaking of snaps, center ﻿Patrick Mekari﻿ struggled significantly, making mistakes on multiple attempted deliveries of the ball to Jackson, forcing the quarterback to improvise a handful of times and ultimately leading to his early exit. The combined miscues left the Ravens walking off the field in Orchard Park looking up at a final scoring output of a measly three points, even after outgaining Buffalo (340-220), dominating time of possession (35:33-24:27) and converting more third downs (41.1 to 30.7%) than the Bills. They’ll have many months to reflect on their missed opportunities.