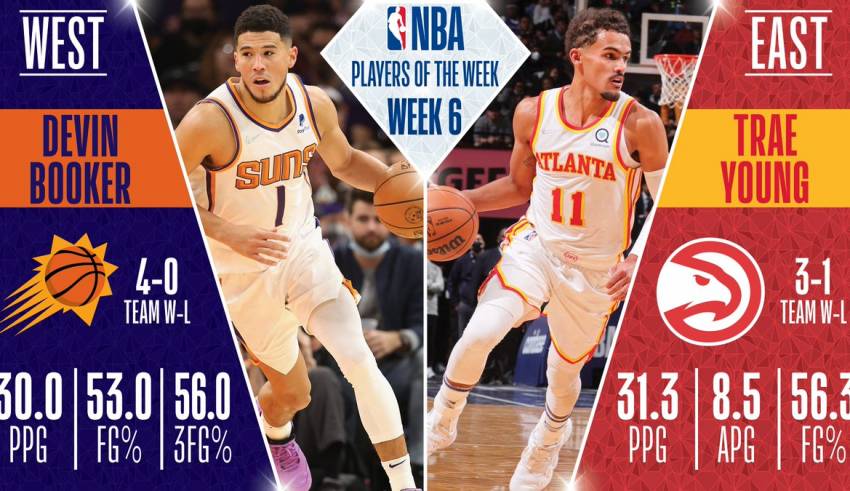 Phoenix Suns guard Devin Booker and Atlanta Hawks guard Trae Young have been named the NBA Players of the Week for Week 6.

NBA Players of the Week for Week 6.

Check out their performances from the past week of action.

Check out the top plays from Devin Booker’s Week 6 performances.

The Suns’ star led the way for Phoenix as it grew its NBA-best win streak to 16 games with a 4-0 record during Week 6. Booker averaged 30.0 points (on 53% from the field and 56% from 3-point), 3.5 assists and 2.3 rebounds. He scored 30-plus points in three straight games to close out the week, including a dominant performance against the Cavaliers for 35 points on 14-for-21 shooting. The Suns (17-3) are currently 1.0 game behind the NBA-leading Warriors for first place in the West standings.

A 50-50-90 week.@DevinBook has been named the Western Conference Player of the Week! 🔥 pic.twitter.com/S5mtEnWwm3

Check out the top plays from Trae Young’s Week 6 performances.

The Hawks’ electric leader scored 30-plus points in every game during Week 6 as he guided Atlanta to a 3-1 record. Young averaged 31.1 points (on 56.3% from the field and 51.7% from 3-point), 8.5 assists and 4.0 rebounds over the four games, including 31 points and 10 assists against the Grizzlies in just 27 minutes of action. The Hawks are tied for the 8th seed in the East standings with a record of 11-10.

Congratulations @TheTraeYoung on being named Eastern Conference Player of the Week!