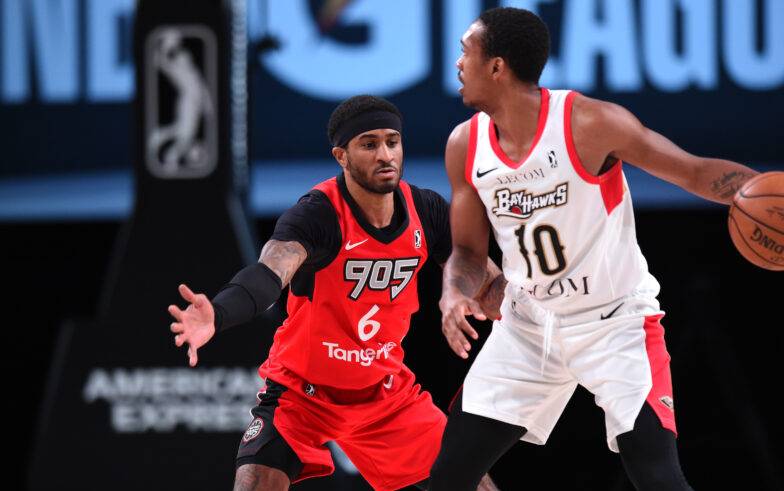 Gary Payton II and his more famous father pose an interesting question to devotees of basketball defense: Is that what the D in DNA stands for?

It became legit to wonder after Payton II, 28, was named last month as the 2020-21 G League Defensive Player of the Year for his work with the Raptors 905 squad in the Orlando bubble. The 6-foot-3, 195-pound Oregon State product averaged 2.54 steals to go with 10.8 points, 5.6 rebounds and 2.6 assists in 13 games in the pandemic-shortened season. He got seven of his 33 steals, as well as 11 defensive rebounds, on Feb. 13 against the Ignite elite team.

So if the G League had a Defensive Player Ladder the way the NBA does, Payton II would hold the top rung. He’s proud enough of the award he got.

“I’ve been around that mindset my whole life, just from watching my dad,” he said a few days ago in a phone interview. “I think it’s pride – it’s fun for me to guard the best player [on the other team] and shut them down. I like to cause havoc on that side of the court, whether I’m guarding a guard or a big. I think my natural instincts take over.”

That’s where the issue of nature vs. nurture comes in.

Payton the elder is the only point guard to win the NBA’s Defensive Player of the Year award in its 39-year history. He did so in 1995-96, a runaway winner in the voting (56 first-place votes) over historic defensive candidates such as Scottie Pippen (15), Dikembe Mutombo (11), David Robinson (9), Hakeem Olajuwon (8), Michael Jordan (7) and Dennis Rodman (4).

The award came in the midst of Payton’s nine consecutive All-Defense first-team selections. In that 1995-96 season, playing coach George Karl’s heavily (and rare at the time) switching style, Seattle controlled the Western Conference, finishing 64-18 with defensive and net ratings second only to the Bulls, and met Chicago in the Finals (losing in six games).

Nicknamed “The Glove” for how closely he stuck to his men, Payton finished sixth in MVP balloting that season, one of eight times he placed in the Top 10.

Check out some of the best defensive moments from Gary Payton’s career.

Believe it or not, that’s when Payton II said he believes his embrace of defense began. He was only 3 years old by the 1996 Finals, but claims he absorbed the lessons on display.

“It started from there, everything that went on that season,” he said. “After that, there were a bunch of players I grew up around, coming to the gym, like [Jason] Kidd, Kevin Garnett and other friends of the family. I’d pick their brains too, just try to take as much knowledge.”

It certainly is possible Payton II got his unwanted nickname around that time. That’s right, “The Mitten.” “I’ve tried to stop it multiple times,” he said, with a laugh. “It was automatic, I guess.”

The typical image of a great basketball player and his or her young child is for the parent to hoist the kid close to the rim so dropping the ball through is easy and fun. The Paytons apparently didn’t do any of that, nor did they work on footwork or tenacity at the other end of the court.

“Growing up, he was always competitive with us. I think that was him putting that in us,” said Payton II, who has four non-playing siblings. “But it wasn’t like we went to the gym and worked on defensive drills. I just picked it up at a young age because I was around it.

“Then I remembered when I got older. My dad kind of let me do it on my own and figure it out. It’s really just repetition. I do watch film on certain guys, and I try to be as disruptive as I can.”

The NBA’s developmental league has been giving out its DPOY since 2002. The most successful winners, by games eventually played in the NBA, include Toronto’s Chris Boucher and former role players DeAndre Liggins, Greg Stiemsma and Mikki Moore.

Obviously it’s an honor Payton II would rather not win back-to-back. He played 61 games in the NBA from 2016 to 2020 with the Bucks, the Lakers and the Wizards, and his goal is to get back. He believes defense can be his ticket.

“This season, I guarded a lot of fours and fives,” Payton II said. “I can bang with the big fellas, I have no problem with that. I actually think I’m more physical than the league likes. I always say, if I had a chance to play in the era my dad did in the ‘90s, I would love that because of the bumping and hitting they allowed.

“Now I use my mind more, trying to outthink the offensive player to find ways to make him uncomfortable. My main thing is finding a place where it’s the right fit and the right time. And just trying to get one guaranteed year, when I can impress some people to maybe lock in for multiple years.”

(All stats through Monday, April 5)

Don’t look now, but Gobert isn’t just a favorite to win his third Defensive Player of the Year award – he’s also likely to get some MVP votes, given his impact on Utah at both ends, his efficiency and the injury situations of some otherwise natural candidates like Joel Embiid, LeBron James and Anthony Davis. Still, it’s his results as a rim protector and helper – a 6.6 percentage point difference in opponents’ FG%, the 19.5 DFGA he faces and his 0.168 defensive win shares – that fuel the Jazz’s play overall.

Gonna let @georgesniang20 say it: “I don’t think anybody affects the game more defensively than Rudy does and that’s just a fact.”

Philadelphia has stayed afloat in the defensive rankings during Joel Embiid’s injury absence in part because of Simmons’ equal or greater case for DPOY. He’s averaging 1.5 steals, 3.5 deflections and 1.3 loose balls recovered nightly, while taking pride in shadowing opponents’ most potent scoring threats as needed. He has been the league’s top on-ball defender all season.

The Pacers center still is your leader in blocks per game (3.5) and total blocks (156). And he swatted eight in Indiana’s past three games. But Turner has been in the red each night for a cumulative minus-38, though the team was outscored by 16 in going 1-2.

Myles Turner defense to 🔒 up the @Pacers win! pic.twitter.com/Zi08zAbNbB

The mix-master of Milwaukee’s defense has a 106.6 defensive rating. Opposing shooters make 41.7% of their shots against him. [ NBA.com/Stats | Players Defense Dash Overall ] And in coach Mike Budenholzer’s schemes the past three games, last year’s DPOY and his mates have outscored teams by 10.1 points, limiting them to 42.1% shooting.

It’s sometimes hard to separate the individual from the team entry on this Ladder. Utah has Gobert, Mike Conley and others. The Sixers have Simmons, Embiid (when healthy) and Matisse Thybulle. Milwaukee has Antetokounmpo, Jrue Holiday, Brook Lopez, and so on. Well, the Heat have Adebayo and Jimmy Butler, both of whom merit defensive acclaim. Adebayo gets the nod for logging more games, anchoring Miami’s D full-time, and making a 7-point difference when he’s on the floor vs. off. [ NBA.com/Stats | Miami Heat ]

(In no particular order)