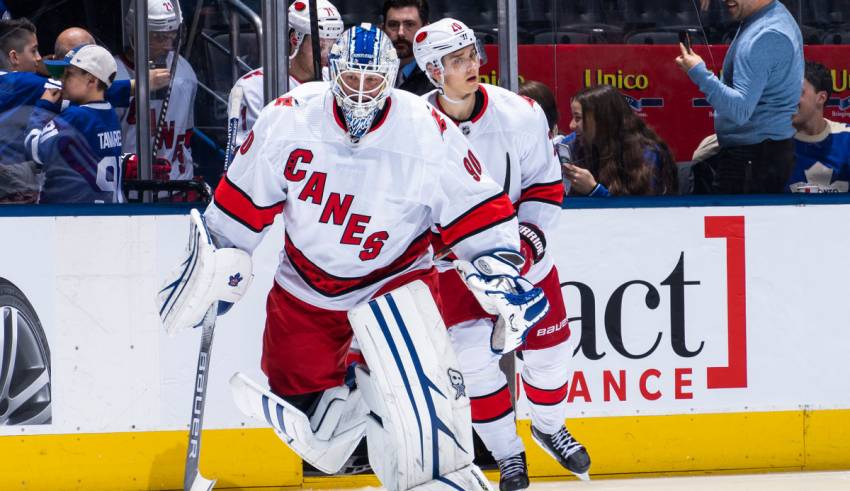 Why can’t we have nice things?

One of the most fun occasional occurrences in sports is the emergency backup goalie in the NHL, but league officials and general managers will discuss changing the EBUG rules at the GM meetings next week in Boca Raton, Fla.

David Ayres, a 42-year-old Zamboni driver for the AHL’s Toronto Marlies, was pressed into emergency duty for the Hurricanes and backstopped a 6-3 victory against the Maple Leafs in Toronto on Saturday after both Carolina goalies – James Reimer and Petr Mrazek – suffered injuries.

“I think it’s a fair question,” NHL deputy commissioner Bill Daly told reporters in Washington when asked about the potential rule changes, according to NHL.com. “It’s something we’ve given some consideration to over the years.

“As recently as last year, we discussed [it] with the general managers. It happens very, very rarely, but when it happens, it obviously raises everybody’s attention to the issue and whether there are fixes that need to be made to that particular issue.”

Ayres, who allowed two goals on 10 shots in 29 minutes of action, became the oldest goalie in league history to win his regular-season NHL debut. The former minor-leaguer also has served as the Maple Leafs’ emergency goalie for the past three seasons. He got to keep his No. 90 Hurricanes jersey for his contributions, and has been on a whirlwind media tour since the historic win.

“There’s no easy fixes to it,” Daly said. “Particularly, we have to work with the [NHL] Players’ Association. Who’s a player? Who’s not a player? What qualifies all of that? But obviously we want what’s best for the game, and we want to make sure people aren’t putting themselves in danger by playing goal in a National Hockey League game. … So that’s obviously something we have to continue to work through.”

According to the 2019-20 NHL Official Rules, “In regular League and Playoff games, if both listed goalkeepers are incapacitated, that team shall be entitled to dress and play any available goalkeeper who is eligible.”

The previous emergency goalie to appear in an NHL game was 36-year-old accountant Scott Foster, who played for Chicago against Winnipeg in 2018.