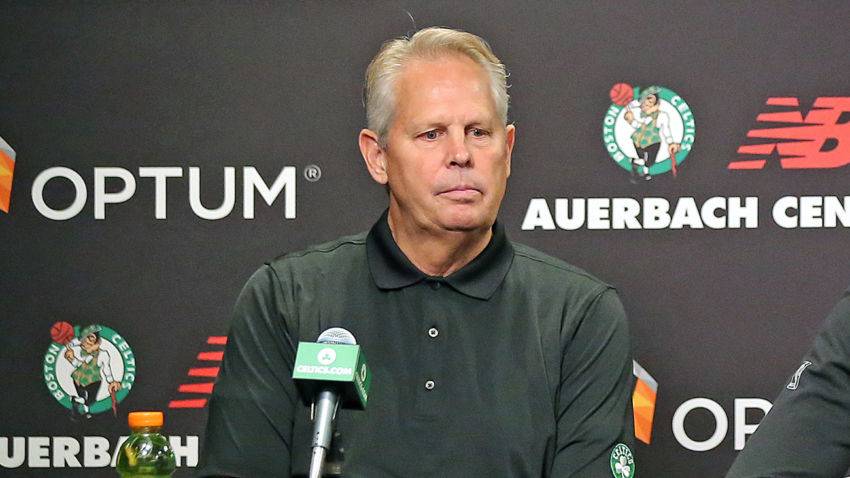 Celtics president Danny Ainge is getting prepared for the sprint that will be the 2020 NBA offseason.

While the 2019-20 season ended just a month ago, the NBA Draft (which is on Nov. 18) and the start of free agency (Nov. 20) will take place less than two weeks before training camp tips off on Dec. 1.

Ainge will be a busy man in that short time. The Celtics hold four picks – including three first-round picks – in next week’s draft.

Holding the 14th, 26th, and 30th picks in the first round, the Celtics have been the subject of trade rumors heading into the draft. One rumor suggests that the team is trying to trade up to as high as the No. 6 pick – currently held by the Atlanta Hawks, according to The Ringer’s Kevin O’Connor.

Ainge didn’t downplay that the Celtics are looking to make trades either ahead of, or on draft night.

“It’s not ideal if we add four rookies to the team that we currently have,” Ainge told reporters Wednesday, giving credence to the idea that the Celtics may consolidate their picks to move up.

Ainge won’t make trades just for the sake of making them though.

“We’re trying to do good deals, not deals to make deals,” Ainge said. “It’s hard to get deals done. There’s teams out there that want to do deals that can’t match up contracts. You have to get third and fourth teams involved. A lot of times deals fall through in that scenario. This is a difficult time for every team.”

This year’s draft class isn’t viewed as highly as past drafts by scouts. Ainge feels the same, but still thinks there’s some talent that can be found with one of the Celtics’ later picks.

Moving forward to free agency, the Celtics will find out soon if forward Gordon Hayward and Enes Kanter will opt in or out of the final year of their contracts. Even though their salaries combined for next season are roughly $40 million ($34.2 million for Hayward and $5 million for Kanter), the Celtics would be roughly $8 million under the $109.1 million salary cap for if both players opt out, giving them little financial flexibility for free agents.

Ainge doesn’t think the Celtics have to do much in free agency. He likes the state of the team, even after they were bounced by the Heat in the Eastern Conference Finals.

“We don’t feel a need to have to do anything,’’ Ainge said. “We like our guys. You can view that as overvaluing our players, but we do value our guys. Our team has been to the final four three of the last four years with a young core group of guys and that’s not nothing. We would like to take a step and the best step right now could be player development, our young players just getting better with more experience.’’

One of the other big questions looming on the Celtics as they complete a quick offseason is if Kemba Walker will be ready for the start of the season. Walker missed nine of the Celtics’ last 16 games prior to the league suspending the season in March due to a knee injury. He was also on a minutes restriction in the eight seeding games when the season resumed before having the restriction lifted for the playoffs.

Ainge has “all the confidence in the world that Kemba will be back healthy, and fresh and ready,” but didn’t rule out Walker missing some time to start the season.

“Last year was a very unique situation,” Ainge said. “We have to put Kemba’s health at the front as a No. 1 priority. We have to make sure we have three more years with Kemba at least. We’re excited about those three years. He’s a terrific player. But, yeah, there could be maintenance issues during the offseason and the early part of the season, but at some point he’ll be back and ready to go.’’