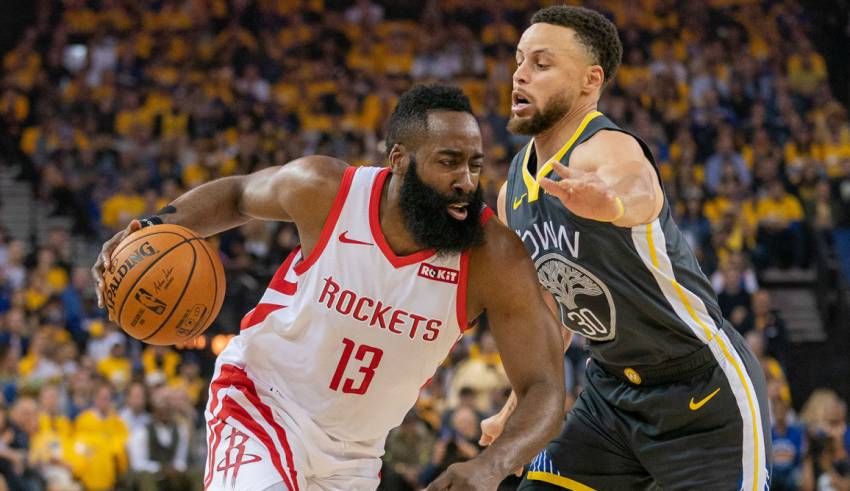 We have reached 2020, which means there are plenty of storylines, events, trades, championships to happen within the next decade. The possibilities are endless but why wait? The Crossover staff made predictions for the 2020s.

We all know the Warriors are the team to watch next summer, with a likely top-five pick and a 23-year old All-Star point guard in D’Angelo Russell to dangle in a trade. Houston is mired in the middle of the pack in the Western Conference and if the Rockets fizzle out early in the playoffs, Houston could look to re-boot. Dealing Harden to a rival may be painful, but a Russell/pick package may be the Rockets best chance to rebuild. For Golden State, plugging Harden in alongside Stephen Curry and Klay Thompson would give the Warriors the most dynamic offensive lineup since … Kevin Durant paired with Curry and Thompson. A championship window would be re-opened and the league would be playing catch-up with the Warriors—again.

Two things have to happen here, obviously: Hammon has to get a head coaching job, and Seattle has to get a team. The timing might not line up perfectly—I wouldn’t be surprised if Hammon got a job in the next few years (pro basketball is definitely the most progressive of the major US sports, and Hammon clearly has earned loads of respect NBA-wide), while expansion doesn’t seem to be high on anyone’s list of priorities. Still, it’s more likely than a team moving, as most of the usual relocation suspects have recently used threats of moving to get arena concessions, locking them in for the long haul. (Unless the economy tanks and teams start losing money; in that case, anything goes.)

For the purpose of our little exercise, though, consider this scenario. If the league expands, they’ll want to do it internationally. Europe would present all sorts of logistical issues, so the NBA would be more likely to start closer to home—Mexico. Putting a team in Mexico City makes sense, but it would leave the league unbalanaced. Granted, that’s not the end of the world. (When the NFL had 31 teams, every week was someone’s bye week, which was not good.) But things work better with an even number of teams. Since a second team south of the border wouldn’t make much sense—it would fragment the Mexican market—Seattle would be the natural choice. Sure, there would be calls for resurrecting the SuperSonics’ name, but I like Sockeyes better, and this is my wacky prediction, not yours.

My bold prediction for the 2020s is that the rising value of franchises will become a sticking point in a CBA negotiation. LeBron has hinted at this before, but when owners sell teams for billions of dollars, players are completely shut out of those transactions. I imagine at some point, the players’ union will shift some of its focus to skyrocketing prices of franchise sales and how players can benefit. Can the union successfully argue the value of franchises is unequivocally intertwined with the players who are responsible for the actual product? I certainly think the players have a good argument, though factors like market size and team history are certainly important. I’m not sure the union could win this potential fight, but I wouldn’t be shocked to see them bring it to the league at some point. It’s a logical step in the empowerment of the NBA’s labor. And players are certainly attune to when money is being made off the NBA that they aren’t a part of. I don’t expect this to be a friendly chat between the two sides. But it could certainly be a discussion sooner rather than later.

This might just be wishful thinking, but it’s better than making a sweeping, depressing statement about, say, the Knicks.

The Nike Adapt BB was just the start of a revolution that is upon us in the sneaker industry. By the time 2027 hits, I believe every sneaker on an NBA court will have some kind of auto-lace feature. But I think LeBron will be the first NBA superstar to have the tech in a signature shoe. Nike wouldn’t invest billions of dollars and a building dedicated to James without giving him first dibs on every innovation breakthrough.

The NBA will expand by adding franchises in Seattle and Louisville

It’s been nearly two decades since the NBA last expanded. The time for another expansion nears.

I predict the NBA will expand by two franchises during the 2020s. One franchise will be the Seattle SuperSonics and it will play in the Western Conference. The other will be a Louisville team that plays in the Eastern Conference.

The case for Seattle is obvious. The city already has a diehard fanbase from the previous Sonics franchise. Seattle is also the nation’s 13 largest media market and nine wealthiest city. Louisville is a more debatable pick. It is a smaller market than other potential candidates, including Las Vegas. Yet basketball is in the region’s DNA and an NBA franchise would be the only major pro team in town.

The NBA has long resisted expansion. Some owners don’t want to divide the pie of league revenue by an additional two slices. But the pie—and national TV deals and licensing and merchandise contracts—would grow with two new franchises in appealing markets. Plus, owners would profit by receiving their cut of expansion fees paid by the two new teams. Considering that the average value of an NBA franchise is $1.9 billion—and is climbing each year—each new franchise would have to pay an expansion fee that might exceed $2 billion.

The NBA will play a regular season game outdoors

The NBA has not been shy about trying things out and creating an increasing number of events. One thing the NBA has never had is an outdoor regular season game. The WNBA actually played a regular season game outdoors in 2008 and college basketball featured multiple outdoor games at the start of the 2010s. The Phoenix Suns even played a number of preseason games outdoors in the late 2000s and early 2010s. Weather would obviously be a concern, but no matter if the game was played on a hardwood floor—or maybe even a blacktop court—it would be a pretty cool spectacle. The NHL’s Winter Classic has proven to be a success, so for one game a year could the NBA give a similar event a chance? Crazier things are possible.

LeBron James and Steph Curry were the only players to accomplish the feat in the 2010s, and Doncic is trending toward their stratosphere through two dazzling seasons. The Slovenian sensation could secure the MVP as early as June 2021, and he should be the favorite on multiple occasions in the next decade. At least one MVP feels almost certain before 2030.

Multiple championships may ultimately be the greater uphill battle. The Western Conference is stacked as currently constructed, and the two Los Angeles teams could remain powers for the next three-to-five seasons. But Dallas appears to have the organizational structure to support Doncic, and a young co-star is already in place. Doncic arrived in the NBA as the most accomplished teenager in European basketball history. He’ll end the decade among the greatest foreign players of all-time.