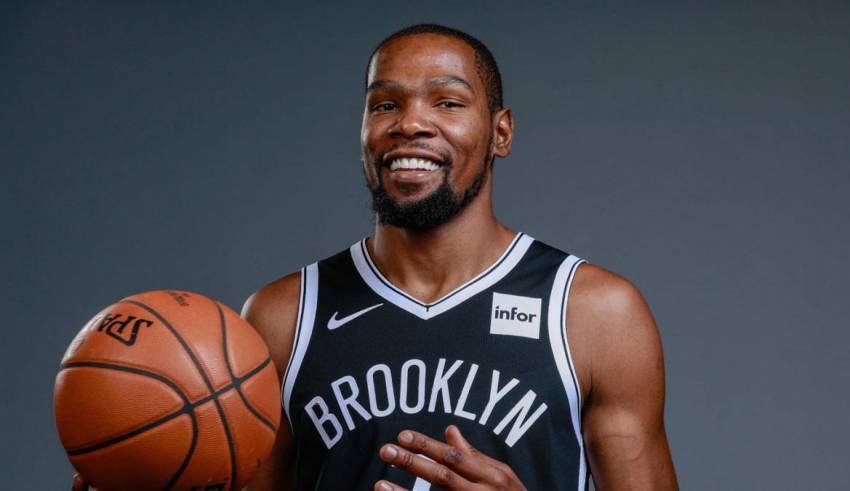 It’s difficult, if not impossible, to articulate the talent behind shooting a basketball. How does a person stand 15 or 30 feet from an 18-inch basket and know exactly how far, and at what height, to shoot a 10-inch ball through it?

We know things like dexterity and spatial awareness and depth perception and hand-eye coordination and muscle memory all play a role, and yet, there is something more. Something undefined. A gift. You can’t explain it, but you know it when you see it. Some people were just born to shoot.

Stephen Curry. Klay Thompson. Kevin Durant. Davis Bertans. Damian Lillard. Trae Young. Duncan Robinson. Kyle Korver. These are just some of the current players who were born to shoot — the kids in elementary school who always landed the wadded-up paper perfectly in the wastebasket. They just had the feel, the touch, and ultimately the work ethic to take that natural talent and use it as a foundation from which their greatness could grow.

That said, great shooters are not all cut from the same cloth. Each of them relies more, or less, on a different component of the craft. For some it’s a quick release. For others it’s a higher release, or deeper range, or a penchant for pulling up off the dribble or navigating screens and shooting on the move.

Which begs the question: What if you could create the perfect shooter, a sort of robot marksman comprised of different sizes, skills, and physical and mental traits taken from different players? That’s the idea with this piece. With the caveat that only one trait/skill can be taken from each player, here’s what I’ve come up with.

In previous eras of basketball, of really human existence, a near seven-foot player having the shooting abilities of Durant would’ve been unimaginable. But here we are. Durant is an exceedingly more athletic, mobile version of Dirk Nowitzki, which is laughable to even write.

And it’s not just Durant’s height. It’s his roughly seven-foot-five wingspan that makes for one of the highest releases in history. It’s the reason he’s such an unstoppable one-on-one player. You can stay in front of him, body him, double him, you can do whatever you want, and in the end he can still just shoot over you.

Over the last five seasons, in fact, Redick has never ranked lower than the 81st percentile in catch-and-shoot efficiency, which is even more impressive for the difficulty of his shots. Navigating screens, a master at the dribble-handoff, Redick almost never has wide-open space in which to shoot, and he’s not a great athlete or all that tall at 6-foot-4, meaning he’s not separating with speed or length and thus often has to contort his body — leaning this way, falling and fading that way — and release from weird angles just to get shots off.

It makes for a lot of tough shots with defenders always hot on his heels, and indeed Redick is making an absurd 52.6 percent of his “guarded” catch and shoots this season (73.1 adjusted FG%) for 1.47 points per possession, which puts him in the 97th percentile league-wide.

Ultimately, catch and shoots in the NBA have a high rate of variables — the pass isn’t always in the same place, you’re not always moving in the same direction or even toward the hoop, defenders are always in different spots and coming from different angles, all of which necessitates adjusting your shot on the fly without losing accuracy. The man shoots legit fallaways on a dead sprint three:

Curry might be the better overall shooter, but you will never find a prettier shot than Thompson’s. Like Redick, he’s a catch-and-shoot king who once scored 60 points in a game while dribbling the ball a total of just 11 times.

A 42-percent career 3-point shooter on massive volume, Thompson is a better version of Reggie Miler, a master screen navigator with an innate feel for finding space to get off his textbook release. Miller was an all-time great shooter himself but his form was all kinds of funky. Thompson’s jumper, on the other hand, is poetry.

In that same interview, Steve Kerr said this: “From a technical standpoint, I think Klay is as good as anybody I’ve ever seen.”

Redick and Kerr are two of the greatest shooters to ever live, and even they bow down to Thompson’s form. The elbow in tight and at 90 degrees, the ball resting in the palm like a waiter’s tray, the high release and goose-neck follow through. It just doesn’t get any sweeter than this.

And at game speed:

Off the dribble: Stephen Curry

No single shot has revolutionized the game more than Stephen Curry’s off-the-dribble three. Time was when shooting a 3-pointer off the dribble was considered an outright bad shot, but Curry’s boldness off the bounce forced defenses to extend to beyond 30 feet on a live dribbler and double off pick and rolls at the same range, which opened the court and distorted defenses to a point that the entire game changed, paving the way for fellow off-dribble snipers like Lillard and James Harden to emerge.

Truth is, other than Durant’s height, you could basically just call Curry the perfect shooter all on his own. He’s a master of off-ball movement, his release is lightning fast, his creativity and range are off the charts, his floater arsenal and mid-range pull-up game are both sublime. But again, if we can only choose one skill from each player, Curry’s off-the-dribble prowess pulls rank.

In 2018-19, Curry ranked in the 96th percentile by hitting 43 percent of his off-the-dribble jumpers for a 57.7 adjusted field goal percentage at 1.16 points per game, per Synergy. The year before that he was 98th percentile. In his two MVP seasons he was 97th and 99th percentile, respectively. Over the last five seasons, he has also never ranked lower than the 92nd percentile as a pick-and-roll scorer, which is largely due to his ability to come off the ball screen firing off the dribble.

It’s a combination of his uncanny handle, which allows him to always bring the ball into his shooting pocket in rhythm and on line, as well as his release, which is unique in that it happens on the way up rather than at the peak, making for one fluid motion from handle to hoist.

Any of the guys on this list would be deadly in a purely spot-up role, but Korver is the guy that most often goes overlooked in the greatest-shooters conversation. This guy is lights out, and he’s been serving as a floor-spacing, spot-up killer his entire career, as opposed to the Currys and Lillards and Durants who have been No. 1 scorers.

Korver’s shooting percentages are ridiculous. In 2009-10, he shot 53 percent from deep. From 2012-2015, Korver shot 45 percent, 47 percent and 49 percent over three respective seasons. Two seasons after that he shot 45 percent again, ranking in the 100th percentile in spot-up points per possession during both his 32-game stint with the Hawks and 35-game stint with the Cavs. This season, at 39 years old, he’s still knocking down 41 percent of his threes for the Bucks.

Bottom line, you leave this guy open, he’s going to torch you.

Lillard, in my mind, has supplanted Curry as the preeminent ridiculous-range shooter in the league. The comfort he exhibits when shooting from 30 feet and beyond is mind boggling. You have to stand on an NBA court and look at the basket from 35 feet away to fully appreciate how far these shots are, and Lillard takes them completely within him, just another shot, ho-hum, and the threat that poses has completely flipped the script on the blitzing double teams that once gave Lillard problems.

Pretty simply, defenses can only extend so far before the space behind them become too much to cover and easy layups ensue. Plus, it’s just natural instinct as a defender to ease up a bit the farther you are from the basket. Even when you know how deep Lillard can launch from, it oftentimes still surprises you.

The NBA 3-point line is 23 feet, nine inches at the farthest distance. So far this season, Lillard is shooting 40 percent on shots from at least 25 feet — more than a foot behind the line. Amazingly, when he extends to at least 30 feet, and as far as 34 feet (more than 10 feet behind the line) his percentage actually goes up to 41 percent.

And it’s not like that’s just a few shots creating a deceiving, small-sample-size result; Lillard has launched 102 shots this season from 30-34 feet, per NBA.com. Indeed, what used to be shots reserved for end-of-clock, desperation heaves have turned into easy money for the man they call “Logo Lillard.”