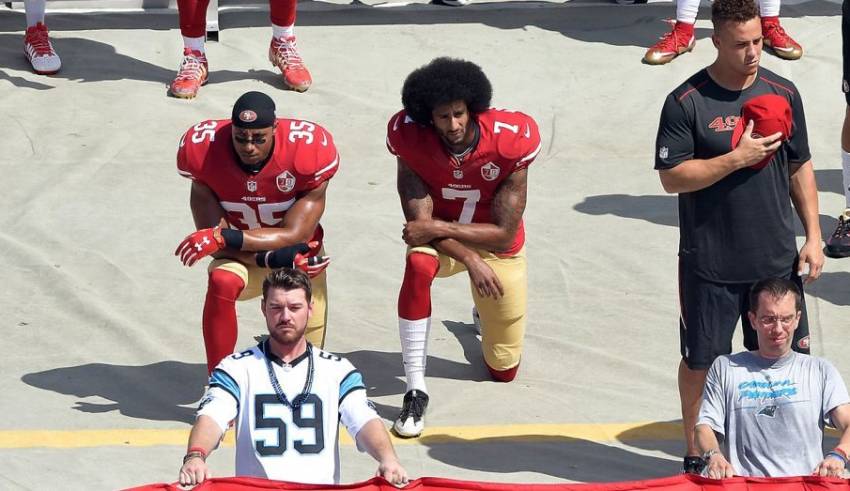 Reid said on Twitter that he asked lawyers Ben Meiselas and Mark Geragos of law firm Geragos & Geragos to review the proposed terms outlined in the 456-page document. The lawyers published a four-page fact sheet detailing potential concerns for players, leading Reid to declare the CBA is “a bigger disaster than we could have imagined.”

In the fact sheet, the attorneys argued the labor deal, as currently constructed, “disproportionately empowers” and “enriches” owners at the expense of players. An expanded 17-game regular season and alterations to disability plans were cited as key liabilities for players.

“At this critical time, players must demand that their health, money, data and dignity be respected and truly valued,” Meiselas said in a letter co-signed by attorney Ray Genco. “Instead, players are being mislead [sic], taken from, and left vulnerable.”

Colin Kaepernick (7) and Eric Reid (35) of the 49ers kneel during the national anthem before their game against the Carolina Panthers at Bank of America Stadium on Sept. 18, 2016, in Charlotte, North Carolina. (Grant Halverson/Getty Images)

Both Meiselas and Kaepernick, who played with Reid on the San Francisco 49ers, retweeted Reid’s post sharing the fact sheet. Kaepernick and Reid led player national anthem protests during the 2016 season.

Meiselas and Geragos served as legal counsels for Kaepernick and Reid during their collusion grievance against the NFL. The two players alleged NFL owners colluded to keep them out of the league due to their role in the protests. The parties settled out of court and Reid has since returned to the league.

Representatives for the NFL and NFLPA did not immediately respond to a request for comment.

The NFL Players Association’s membership of roughly 2,000 players is voting on whether to accept or reject the proposed collective bargaining agreement. Prominent players have expressed concern about the longer regular season, long opposed by players due to the potential health risks, as well as a 48 percent revenue split that some argue is unfair to players.

Players have until Saturday night to vote on the labor deal following an NFLPA extension Monday. The deal requires a simple majority to pass.

The NFLPA sent players a side-by-side comparison of the current labor proposal and the terms of the existing collective bargaining agreement to aid the voting process.

The fact sheet noted that the 10-year term of the labor deal was “not advantageous” to players due to potential changes to the NFL’s economics over the next decade.

Meiselas was also heavily involved in talks between Kaepernick and the NFL on an ill-fated workout last fall. Kaepernick pulled out of the NFL-scheduled workout and held his own session that was open to the media amid concerns with a legal waiver league officials asked him to sign.