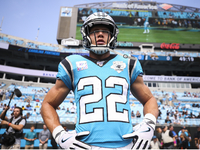 Fear not, Christian McCaffrey has arrived in England, he’s enjoying himself and his back is good to go.

London was calling and CMC assures there was no cause for concern that he would miss Sunday’s clash between his Panthers and the NFC South-rival Buccaneers.

Though McCaffrey missed Wednesday’s practice with a back injury, he was a full participant Thursday and Friday and is expected to be front and center in the Sunday morning (for those back here on the other side of the pond) game.

It was an injury that came when McCaffrey flipped into the end zone in a Week 5 win over the Jaguars — the Panthers‘ third victory in a row. As McCaffrey came down on his back, his landing troubled him a bit in the week to come but it was also the latest highlight in a season overflowing with them, even though it’s still just entering the sixth week.

The NFL’s leading rusher, McCaffrey’s already turned in 587 yards on the ground, his 117.4 yards per game also the current league standard. As the Panthers have produced victories, McCaffrey has likewise been running wild. In those three Carolina wins, McCaffrey has sped, spun and flipped his way to 422 yards on 70 carries, 182 yards on 19 catches and five total touchdowns (four rushing).

These past three weeks have turned the Panthers‘ season and fortunes around, having rescued them from the doldrums and dire prospects of a 0-2 beginning to the year. Their last loss was against the Buccaneers, one in which McCaffrey was held to season-lows of 37 yards rushing and 16 yards receiving. It was also his only game of the season without a trip or flip into the end zone.

“We just have to be efficient,” McCaffrey said. “There is not some secret formula, it comes down to completing passes, being efficient on first and second down and making plays when the ball is in your hands. It’s a huge effort going against a run defense like this and it’s really important to trust your technique, trust your eyes, trust your gaps.”

A dual-threat who’s dazzling fantasy fans with a chiseled frame that’s apparently built for the overwhelming workload he’s taking on, CMC’s star is seemingly on the rise this season. Hardly new to impressive numbers, the real-life action figure seems to be more popular than ever and more renowned.

Now his status is growing internationally.

“Pretty surreal experience to see the impact football has had globally. I’ve really enjoyed my time.”

Among the highlights for McCaffrey was practicing at Harrow School in London, a picturesque boarding school established in 1572.

“It’s been a lot of fun. Definitely a cool experience,” McCaffrey said. “This is the most amazing school I’ve ever seen in my life. Nine-hole golf course over here. It looks like Hogwarts — that’s the first thing I thought. It’s pretty unbelievable.”

Still, McCaffrey stresses that he’s ready despite the back ailment and the focus isn’t on seeing the sights but setting his sights on victory come Sunday.

“We’re here on a business trip to win a game,” McCaffrey said.

And CMC and Co. have unfinished business with the Bucs, as they look to get past their last loss with their latest win.