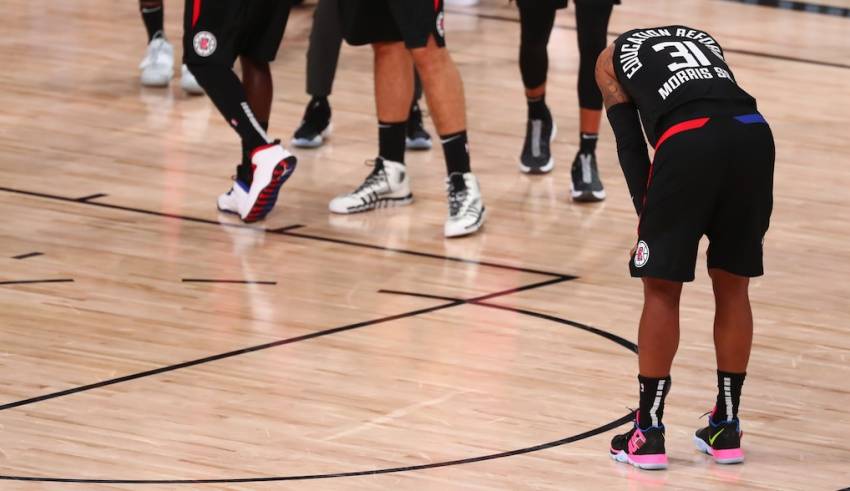 ORLANDO — It wasn’t supposed to end this way.

Not for a team with the championship coach, the reigning Finals MVP, the superstar sidekick, the Sixth Man of the Year bench brigade and a rebranded franchise bankrolled by the richest owner in the league.

The LA Clippers were finally dressed for championship success.

But that music pounding through the walls late into the night at AdventHealth Arena were coming from the opposing locker room, where the Denver Nuggets were busy celebrating their stunning and historic 104-89 victory over the Clippers in game 7.

The Nuggets will take that spot opposite the Los Angeles Lakers in the Western Conference finals, the one everyone had reserved for this star-studded Clippers team that crumbled under the pressure down the stretch in three straight games to get bounced from the bubble eight wins shy of their ultimate goal.

Instead of a historic romp to the conference finals for the first time in franchise annals, the Clippers exited the NBA bubble on a soggy Tuesday night as punchlines once again. They ended their season on the wrong side of history, eliminated by a Nuggets team that, following their victory over Utah in the first round, became the first to come back from 3-1 deficits in consecutive series.

“I’m the coach and I’ll take any blame for it,” Clippers coach Doc Rivers said. “But we didn’t meet our expectations, clearly. Honestly, you could just see the difference in the two teams. That team’s been together. We haven’t. And you could see it as the games went on.”

The Nuggets got a 40-point masterpiece from Jamal Murray and a 16-point, 22-rebound, 13-assist triple-double from All-NBA center Nikola Jokic. Their gaudy performances only served to highlight the vanishing act of the Clippers’ two biggest stars with everything on the line. Reigning Finals MVP Kawhi Leonard scored just 14 points while missing 16 of 22 shots, only marginally better than All-Star swingman Paul George’s 10 points on 4-for-16 shooting.

“It hurts. It hurts. But we move on,” George said. “Year 1 together, first run together, of course we wanted to win this. But we’ve been very optimistic about us being together and building something going down the road.”

It’ll be hard to sell the long-term plan when many considered these Clippers the title favorites all season, and particularly with their newest additions — veterans Marcus Morris Sr. and Reggie Jackson — and healthy players all in place for the playoffs.

Fans and pundits alike will pick over the bones of this Clippers team, and with good reason. They came up woefully short of expectations, given all the championship bluster and hype that followed last summer’s free agent acquisition of Leonard, and the blockbuster trade with Oklahoma City (exchanging promising young point guard Shai Gilgeous-Alexander and a staggering five first-round draft picks for George) that was supposed to have shifted the balance of power in the league in favor of the Clippers.

“Y’all are only doing your job,” Morris said. “Y’all are supposed to pick us apart. Y’all are supposed to kill us. We had it in our hands. Great team over there. They played together. They stuck with it. And I’m expecting the backlash, but that doesn’t define who you are as a man or as a basketball player. We couldn’t get it together. You know, next year we’ll be right back at it … and I can’t wait.”

That power shift was supposed to be now. All the pieces were in place.

But they never looked like that championship team they believed themselves to be, at least not consistently. They built those big leads against the Nuggets and couldn’t hold them.

The Nuggets schooled them in the second half for a third straight game. Eight times in franchise history, including Games 5, 6 and 7 of this series, the Clippers have had an opportunity to play their way into the conference finals. And they’ve failed to cash in each and every time.

“Right when they put pressure on us,” Rivers said, “honestly, I thought we just didn’t come through.”

That won’t stop the Clippers from trying to make sense of it from their own perspective. Rivers, Leonard and George all talked about the struggles they had with their chemistry and cohesion. Their playoff run is the first time all season that Rivers had his full compliment of talent available.

None of that explains how you go up 3-1, with double-digit leads in each of the final three games, and still couldn’t put the Nuggets away.

“To be up 3-1 and lose multiple leads is probably the toughest part,” Morris said. “There were times up 3-1 when we had this series in our hands. We had time to put them away and I think that was the toughest time, to be up 20 multiple times and not be able to come up with the wins. Each players is a veteran and a guy that’s been around, and put a lot into this and that’s probably the toughest thing.”

No, the toughest part comes Friday, when the Lakers and Nuggets suit up for Game 1 of the conference finals to decide who will represent the West and have the opportunity to play for that Larry O’Brien Championship Trophy the Clippers have been talking about for more than a year.

Sekou Smith is a veteran NBA reporter and NBA TV analyst. You can e-mail him here, find his archive here and follow him on Twitter. The views on this page do not necessarily reflect the views of the NBA, its clubs or Turner Broadcasting.