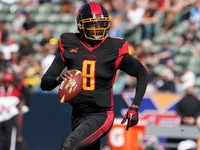 As the D.C. Defenders mightily rolled through the initial two weeks of the XFL season, the L.A. Wildcats struggled woefully.

Those fortunes turned in stunning fashion on a Southern California Sunday afternoon.

Wildcats quarterback Josh Johnson and receiver Tre McBride had big days and phenomenal first halves as L.A. raced out to a 27-point lead on its way to a resounding 39-9 win, bestowing L.A. its first win and dealing the Defenders their first loss.

“I’m proud how we responded. Coach challenged us at the beginning of the week to not focus on our record, to not focus on their record,” Johnson said in a postgame interview on FS1. “It’s only one game.

“Now we gotta get our season rolling.”

Josh Johnson was as consistent as he was dominant in the @XFLWildcats‘ first win ever pic.twitter.com/ZQHWt7vUkQ

Leading the Wildcats (1-2), Johnson threw three touchdowns against no interceptions, collecting 278 yards through the air on 18-of-25 passing. Two of his touchdowns were caught by McBride, who finished with five catches and a game-high 109 yards receiving.

In contrast for the Defenders (2-1), their sensational start came crashing down just like the play of quarterback Cardale Jones, who hardly looked to be in the same for of previous weeks as he struggled to the tune of 13-for-26 for 103 yards and a whopping four interceptions. The outcome itself was surprising, but the Wildcats’ first franchise win came as they scored an XFL season-high 39 points after combining for 35 in the firs two weeks. It was also the largest margin of victory in the XFL so far, as the Wildcats raced out and the Defenders sputtered along, hardly looking like the class of the league many presumed them to be. After Sunday, the Wildcats have life in the 10-game season, while the Defenders are now tied for first in the XFL East with the St. Louis BattleHawks.

Los Angeles rolled off the game’s first 27 points before a Ty Rausa field goal put the Defenders on the board and gave the game its 27-3 tally at intermission. At halftime, the stats told the dominant tale, as the Wildcats had outgained the Defenders, 157-83, and L.A. having caused three turnovers and relinquished none. Johnson was a sterling 10-for-14 for 128 yards and two scores, while Jones, who began the game at a miserable 1-of-5 clip, had six completions in 14 throws for 43 yards and two picks.

L.A. running back Martez Carter also had a huge day with 20 total points as he had a pair of rushing touchdowns, a TD reception and a two-point run. In an oddity in the game, the Wildcats’ resounding start came with little production from wide receiver Nelson Spruce, who had been the highlight of the season for the previously winless squad. Spruce ended up with three receptions for 75 yards.

D.C. back Nick Brosette had the Defenders’ only touchdown on a 38-yard run to the end zone in the fourth quarter that did nothing for the game, but save a little face on the scoreboard.

The Defenders’ dud of a day was marked by five turnovers (the Wildcats had none).

L.A. cornerback Mike Stevens had two interceptions and safety Jack Tocho had a fumble recovery and a pick, as the Wildcats played inspired football from start to emphatic finish, which saw coach Winston Moss, sporting a boot on his left foot, given a Gatorade bath as he smiled and limped to shake the hand of Defenders coach Pep Hamilton.

The Wildcats are winless no more, leaving the Tampa Bay Vipers as the XFL’s only team still searching for win No. 1. And just the same, only one undefeated team remains in the Houston Roughnecks (3-0) as the Defenders tasted defeat for the first time and did so in bitter fashion.