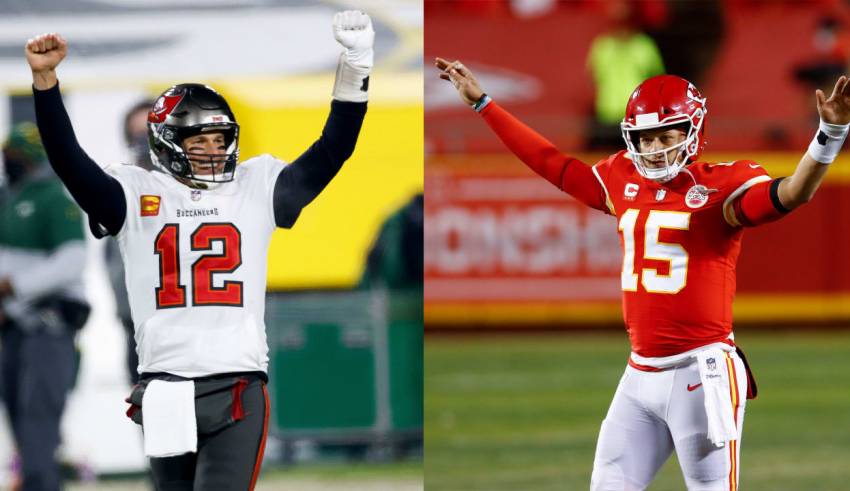 Here’s what we learned from the Championship Sunday doubleheader.

1) New team, new conference, new city, same result. Tom Brady is going back to the Super Bowl. TB12 will play in his 10th Super Bowl after helping guide the Buccaneers to a road win in Lambeau Field over MVP favorite Aaron Rodgers and the Packers. The 43-year-old QB made plays early, particularly on third downs, dropping dimes and stepping into rifle shots over the middle. Brady tossed three TDs and 12 first downs to move the chains in several high-leverage situations. He finished with 280 yards, but could have earned more if it weren’t for several Bucs drops. Brady stubbed his toe in the second half, throwing three interceptions when Tampa could have put the game away, including a pass just high off Mike Evans﻿’ fingertips. The Bucs D picked up its QB, however, as Tampa held on for the win. Brady was fearless with downfield shots, attempting nine passes of 20-plus air yards. He was feast or famine on those plays, with all three of his INTs coming on those shots. For all the criticisms of Brady’s arm early in the year, the old man proved once again he’s still got a rifle and deep touch when given time. Given his age and all the things stacked against him heading into his first season with a new team after 20 years, it’s remarkable. For all the superlatives that can be said about Brady, that he’s playing for the chance to hoist his seventh Lombardi Trophy is the highest praise that can be said about one of the game’s greatest competitors.

2) Aaron Rodgers clawed the Packers back in the game after Green Bay got down 18 points early in the third quarter. Rodgers made a bevy of amazing strikes all game, including an early dime down the sideline to Marquez Valdes-Scantling for a 50-yard TD. Rodgers sprayed the ball all over the field, completing 33 of 48 passes for 346 yards and three TDs with an INT. With the Bucs’ stifling run defense, it was clear entering the game that Matt LaFleur would lean on his QB. After getting down big, Rodgers marched his team for back-to-back TD drives to pull the Pack within five points before the third quarter was over. Missed opportunities, however, will haunt Green Bay. Two goal-to-go situations will particularly be damaging, as Rodgers threw incomplete six times in scoring position and the Packers settled for field goals (more on that later). The red zone misses were the difference in the game. Also of issue, were back-to-back three-and-outs in the third quarter after Green Bay’s defense forced turnovers. Once again, Rodgers and Co. fell short in an NFC Championship Game as the QB missed out on another chance to play in his second Super Bowl.

3) Credit the Tampa Bay defense with dominating up front. Shaquil Barrett and Jason Pierre-Paul were game-changers, screaming around the edge, collapsing the pocket and relentlessly discombobulating Rodgers. Barrett complied three sacks, while JPP took down Rodgers twice. It was the first time all year we’ve seen a team batter the Packers’ O-line. Injuries finally caught up to Green Bay, with the Bucs edge rushers taking advantage of David Bakhtiari﻿’s absence. That injury alone could be the reason the Packers are headed home. The Bucs took advantage. Behind the awesome game from the D-line, Devin White and Lavonte David flew to the ball, and the secondary made plays despite dealing with injuries of their own. Jordan Whitehead forced two fumbles before exiting due to injuries, leaving Tampa with two backup safeties in the game. Todd Bowles’ young secondary, however, made plays when it was needed. The coverage forced Rodgers to hold the ball on several occasions in the fourth quarter. The Bucs defense also stood tall in the red zone, making game-changing plays in the compressed area. The Bucs might have given up yards, but when Bowles’ squad needed to make big plays, it got off the field more than not Sunday afternoon.

1) The box score and the game tape from this one looked a lot like most of the Chiefs’ wins. Kansas City peppered its offensive possessions with gains of 10-15 yards, taking what the Buffalo defense gave it as the Bills aimed to prevent the explosive plays for which the Chiefs are well known. The problem was the Chiefs’ smaller chunks turned into explosive plays, and by the time we got to the second half, the Chiefs had posted three touchdown drives of five minutes or less. It comes as a surprise to very few to see that Tyreek Hill finished with nine catches for 172 yards, Travis Kelce caught 13 balls for 118 yards and two touchdowns, and Patrick Mahomes finished with a passer rating north of 127. Kansas City provided the internet with a bushel of easy-to-share clips of Hill streaking down the field and Mahomes extending plays to find open targets for big gains, all with the same theme for the unfortunate defenses trying to stop them. In the end, it was once again simple: Buffalo couldn’t do it, just as Cleveland couldn’t, nor could the vast majority of teams the Chiefs faced in the regular season. Save for a futile comeback attempt to make the score a little more respectable, the Bills lost this track meet by a wide margin in a fashion that’s all too familiar to the many clubs unfortunate enough to find themselves in Kansas City’s path.

2) The exciting showdown so many of us thought was coming never materialized because the Bills’ explosive offense couldn’t get its gunpowder out of the barrels it had rolled out onto its sideline. Credit is due to Kansas City’s defense, which sabotaged Buffalo’s attempts to put significant points on the board by limiting the Bills to a 5-of-14 night on third down, and held Buffalo to three field goals on trips into Kansas City territory — including two possessions that ended inside the 10-yard line. The key to Kansas City’s defensive success centered largely on the Chiefs’ ability to take Stefon Diggs out of the game. At halftime, Diggs had just two catches for 12 yards, and he reached the start of the fourth quarter with a total of four receptions for 28 yards. Josh Allen was forced to look elsewhere, finding early success in short-yardage situations by dumping it off to tight end Dawson Knox﻿, but without his top receiver making much of an impact and no rushing game to speak of (Allen led the Bills with 88 yards on seven attempts), Buffalo’s offense entered a rut it couldn’t lift itself out of until the game was already decided. Add in Kansas City’s ability to get after Allen — the Chiefs pressured him on 25% of his drop-backs, holding him to a completion percentage of 33.3 on such attempts — and their four sacks for a combined loss of 53 yards, and we saw what a watered-down Bills offense would look like in a pivotal contest.

3) It’s interesting (if not downright frustrating) to witness coaches who typically direct their teams fearlessly then suddenly tighten up in big moments, pivoting to taking the points just to keep a game somewhat within reach instead of flirting with a blowout. That was Sean McDermott’s approach Sunday evening. McDermott sent the field goal unit out for an attempt with the ball at Kansas City’s 2-yard line just before halftime in a 21-9 game, then did it again from Kansas City’s 8-yard line in a 24-12 game midway through the third quarter. Sure, it kept the Bills within striking distance — if a touchdown plus a field goal is considered striking distance against the league’s most explosive offense — but it didn’t make the dent that is absolutely essential to attempting to take down the reigning champs. It wasn’t until the Bills were down, 38-15, that McDermott threw caution to a wind that had already swept away his team a quarter earlier, going for it on fourth and-1 to extend a drive that ended in a touchdown pass to ﻿Isaiah McKenzie﻿ to cut the deficit to 38-21. And even then, Buffalo’s two-point conversion attempt failed via interception in the end zone. Too often, the Bills were on the doorstep of matching Chiefs touchdowns with their own, but elected to take the points and keep the score within nine, burning precious time and wasting away rare opportunities to try to keep pace with the fast-moving Chiefs. There’s coaching to win, there’s coaching to not lose, and there’s coaching to not lose by a huge difference in points. Only one of those actually wins you the game, and in a massive moment like Sunday night’s conference championship game, McDermott did not coach to wrest the AFC crown from the Chiefs’ grasp.