April 22, 2021
Trending
Home NBA Celtics and other NBA clubs getting in the zone – Boston Herald 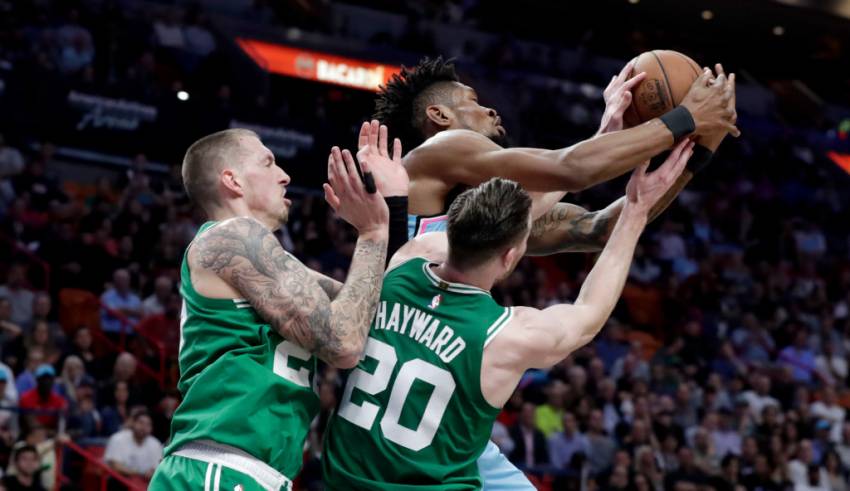 There was a time when zone defenses were outlawed in the NBA, with the league believing such schemes would slow the game and take away from the individual artistry of its players.

Then, when zones were allowed, greater refinement of outside shooting made coaches shy away. In the college game, good perimeter marksmen were known as zone breakers, and now that the 3-point shot was here, no one wanted to get caught leaving dead-eye gunners free at the arc.

But even though it may seem counter-intuitive, zone defense is making a comeback.

“I don’t know why. Maybe it’s just like, you know, I think the game’s radically changed here in the last three or four years, right? I mean, radically. And it’s probably about time that we do something else defensively to catch up or try something different against the radical offensive shift. That’s probably all it is.”

Brad Stevens spoke of the difficulty of defending what amounts to a larger floor now that shooters are expanding their range.

“We’ll go as far as we need to go to challenge a shot, but we won’t … You know, I think making sure that you’re in the air space at 40 feet is kind of the new frontier of NBA defense,” he told reporters. “So there’s a reason why, if you’re not really athletic and you don’t play with multiple efforts, you’re not going to guard very long in this league. It’s just too spread out, too many good players.

“Defense is harder today than it was six years ago when I first came into the league, because you have to cover so much more ground. I don’t think anybody’s practicing their shots just standing on the line anymore. Everybody goes through a series of deep reps, and it’s amazing what these guards all across the league can do.”

In response, the Celtics have gone to a zone on occasion. Stevens discussed with the Herald the changing philosophy for both his own defense and how to play against zones.

“We spent a lot of time on it in the preseason because you could see it coming at the end of last year,” the coach said. “You know, we got zoned in three of our last five regular season games last year for a lot of the game. Brooklyn and Miami were doing it a ton.

“But you knew it was coming en masse because it’s so hard to guard the 3-point line. Every team has tried bits and pieces of it certainly. We’ve been zoned by a number of teams already this year, and that’s why you want to try to have as many skilled guys out on the floor to cut, pass, shoot and take advantage of it.”

As for what begat the change, Stevens said, “The response is just how do you guard that depth. I think that in the past you would always think that a zone would be used to guard the paint, and now a zone, I think, is used to take people out of their comfort zone and take them out of their reads that they practice every day and guard that depth. That’s why it pays to have guys around the perimeter that can really think and cut and figure out a way to still attack for layups and open shots.

“You definitely coach against more defenses now that seven years ago when I came into the league and I’m sure long ago. But Toronto goes 1-2-1-1 full court, Charlotte 1-2-2 full court and mix in some 2-2-1 full court. Like, seven years ago, you weren’t preparing for full court offense in the NBA. Now you have to. You have to have an idea about what you want to do to attack that stuff.”

Said Charlotte coach James Borrego, “This is a response to what we’re seeing offensively, where you’re so spread out, the floor is open, there’s so much movement. With all the shooting out there, sometimes the best option is just to zone and bring disruption to an opponent’s offense. We’ve used it at times, and we’re going to continue to use it just as a break in rhythm and disruption. But, yeah, I’ve seen an uptick.

“You would think, with the amount of shooting now in the NBA, you’d see zones go away, where zones are now coming back and being very disruptive. I just think offenses are so high-powered now that you’re going to have to give them different looks. For us to have any shot night to night, we’re going to have to mix up our coverages, and I think that’s what other teams are understanding, as well.”

It’s a measure that the NBA and basketball in general can never be stagnant.

“It’s always evolving,” said Borrego. “And I think with the freedom of movement, the spacing, the shooting, the athleticism out on the floor, defenses have to adjust. Some teams are able to deal with it. They have the athleticism and size to stay in one coverage. We’re one of those teams that doesn’t have that luxury right now, and we have to figure it out and adjust our defense accordingly.”

Stevens won’t allow himself or the Celts to get caught flat-footed.

Tuesday vs. Brooklyn, 7:30 p.m. — Any chance Celtic fans had to see Kyrie Irving playing in the TD Garden this season went away when it was announced he’d miss the rest of the year with shoulder surgery. He’ll thus miss all four games against the Celts. At least in the cold math terms of their record, the Nets haven’t seemed to mind. They were 8-12 with him and were 18-19 without him heading into the weekend. With Kevin Durant out, as well, this seemed like a good chance for Brooklyn to add a lottery pick to the roster. But, barring an uprising from Washington, Chicago or Charlotte, the Nets seem a pretty good bet to make the playoffs.

Wednesday at Cleveland, 7 p.m. — The Cavaliers are still hanging around near the bottom of the Eastern Conference standings, but as the weekend approached they had won three out of four since J.B. Bickerstaff took over as coach from John Beilein after the All-Star break. Coming on the second night of a back-to-back, this might be a bit more difficult than it seems for the Celtics.

Friday vs. Utah, 8 p.m. — The Celts did quite well on their last back-to-back, taking a 114-103 victory over the Jazz in Salt Lake City last Wednesday after a 12-point win in Portland the night before. It will be interesting to see whether the teams try to alter their defenses on Jayson Tatum and Donovan Mitchell, who went for 33 and 37 points, respectively.