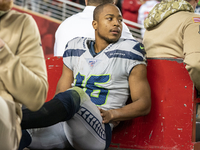 After a scare last night that required a visit to a Bay Area hospital, Tyler Lockett appears to be OK.

Seahawks coach Pete Carroll told reporters Tuesday the receiver did indeed stay overnight at a Stanford hospital near the 49ers‘ home of Santa Clara due to severe swelling in his leg, but it was more of a precautionary stay than anything, per 710 ESPN Seattle. The injury shouldn’t be a problem for Lockett in the future, Carroll added.

“It should be OK, it shouldn’t be a big problem going forward,” Carroll said. “There’s concern there could be some complications when you have something like that.”

NFL Network’s Tom Pelissero reported Tuesday on NFL NOW that Lockett did not need to undergo surgery, and his injury was a “very bad bruise” that swelled a lot.

Lockett had initially been hospitalized after suffering the contusion late in Monday night’s win over the 49ers. Lockett caught the final kick of regulation and downed it but didn’t return to the field after that, instead receiving medical attention and eventually making the trip to the hospital.

Carroll had talked about how serious the injury appeared to be for Lockett, but mentioned it was good that the Seahawks‘ medical staff appeared to have gotten ahead of whatever issue was plauging Lockett. Less than 24 hours later, the prognosis is even brighter, with Carroll mentioning how fortunate the Seahawks are to have a bye this week.

At 8-2, Seattle’s Monday night’s overtime win over the 49ers helped put the Seahawks right back into the conversation for the NFC West crown. Their chances will be significantly improved if Lockett can play a part in the pursuit.