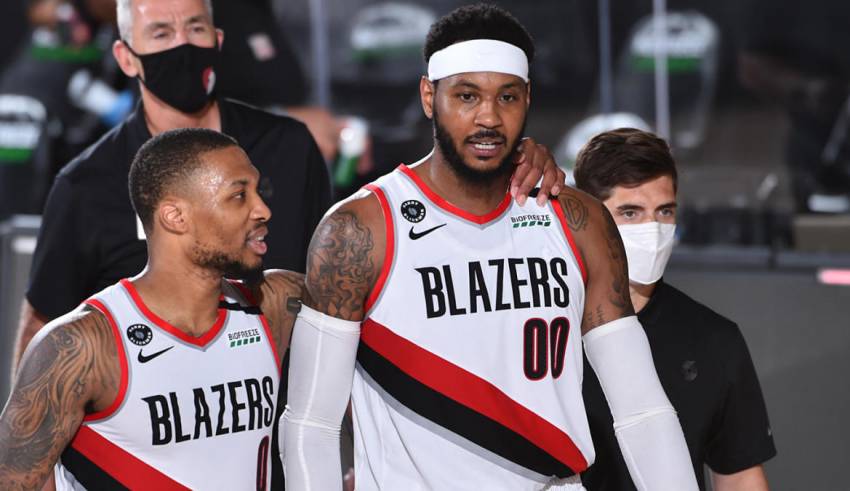 What a difference a year has made for Carmelo Anthony. Last August, Anthony was on television detailing his fallout with the Houston Rockets, in which he said he felt his departure was “deeper than basketball” after just 10 games into his disastrous stint with the team. Anthony stated his case as to why he feels he should still be on an NBA team, and that he would accept a bench role if necessary. One year later, Anthony has found a new home as a starter in the Portland Trail Blazers lineup, where he’s putting up 15.4 points a game, while shooting 38.2 percent from 3-point range.

Melo’s season became even more special on Sunday night as he reached an important milestone in his career. The veteran overtook the 15th spot on the NBA‘s all-time scoring list, passing Paul Pierce, with 26,398 career points. Anthony entered the game needing just six points to move into the top 15. He more than took care of business by notching 20 points to go along with seven rebounds, two steals and a block. The next NBA great Anthony can pass on the list is Spurs legend Tim Duncan, who is just under 100 points ahead of him at No. 14.

The last few years of Anthony’s career have been incredibly tumultuous since being traded from the New York Knicks in 2017. The last full season he played was with the Oklahoma City Thunder, but after that lone year the franchise traded him to the Hawks, who later waived him. He then he signed as a free agent with the Rockets, where he lasted just 10 games, and then was traded to the Chicago Bulls who also waived him in February of 2019. Then, after waiting for teams to give him another shot, the Trail Blazers came calling. It was almost the perfect situation, as Portland suffered several early-season injuries to its frontcourt and desperately needed help. The team signed Anthony in November, and he’s been an integral piece of this team’s chase for the playoffs ever since.

After the Blazers’ pivotal win over the 76ers Sunday night, Anthony shared his thoughts on reaching that milestone.

“First of all, it’s an honor and I’m blessed to still be able to do it, to reach that top 15. I don’t want to take it for granted because there’s some greats on here,” Anthony said. “But it’s kind of hard to celebrate that at this moment. … It’s a great milestone. I don’t want to downplay it, but it’s very hard to harp on and talk about when you still in this dog fight. There’s still so much we have to accomplish.”

While Anthony didn’t want to celebrate the moment too much, his teammates made sure they showed him some appreciation, as the Blazers gave him the game ball after the victory.

It’s great to see Portland celebrate Anthony, who was struggling to find work in the league. He was criticized for not adapting his game to fit the style of play today, and he previously scoffed at a question during his time with OKC if he would consider coming off the bench. The past few years have clouded just how great Anthony’s career as a whole has been. Let’s remember he was an absolute force when he was with the Nuggets, and during his entire time with the Knicks. He’s perhaps one of the best mid-range scorers in NBA history, and is undoubtedly a first-ballot Hall of Famer. It’s nice to see people be reminded of the player he was and still is.

As Anthony said, though, Portland still has work to do this season. With the win against the Sixers, the Blazers are now just a half-game behind the Grizzlies for the No. 8 spot in the West. While staying within four games of the eighth seed was always the goal to force a play-in game, passing Memphis for that spot would be even more ideal, as Portland would then only have to beat the No. 9 team once to secure a playoff berth. The Blazers have two games remaining against the Mavericks and Nets, while Memphis has the Celtics and Bucks to close out its schedule.