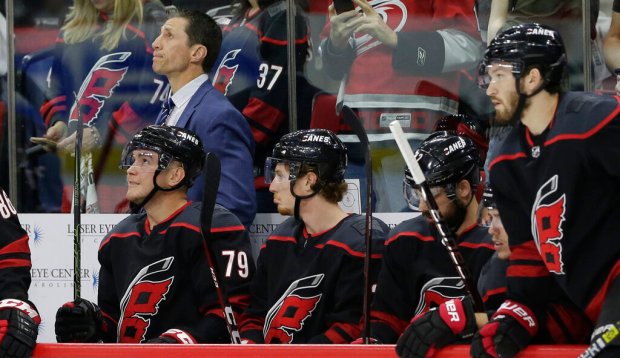 For the first time this season, the Bruins rise to the top of the rankings. Their 8-1-2 start entering Tuesday is worthy of sitting at the top, especially after their recent tough patch in the schedule they soared through with hardly a bump.

2. Colorado Avalanche (1): No Gabriel Landeskog is a tough blow and Mikko Rantanen is already out, so we’ll see if this snowballs for the Avalanche.

3. Washington Capitals (3): They continue to score and John Carlson is one of the best defensemen in the league so far, truly a time to be alive.

4. Vegas Golden Knights (6): The results haven’t fully been there for the Knights all the time, but their flashes are enough to believe they’re still an elite team in the west.

5. Carolina Hurricanes (4): Maybe not a category 5 Hurricane any longer, they haven’t trailed off to tropical storm quite yet. Just wait until (if) their top players start scoring more.

6. Nashville Predators (18): Roman Josi is locked up and having a stellar season, as is Ryan Ellis. Now, imagine if their forwards start to score!

7. Buffalo Sabres (8): “Is Buffalo for real,” we ask on an endless loop until the sun consumes the earth and the Sabres are not a playoff team again.

8. Edmonton Oilers (10): Eventually we won’t have to pretend the Oilers are good, probably.

9. New York Islanders (14): With seven wins in a row, the Islanders are proving last season might not just have been about the guys in net.

10. St. Louis Blues (9): Vladamir Tarasenko is out for five months and that’s about as tough a blow the Stanley Cup champs could get. Guess they’ll be chasing after somebody, they gotta get him somehow.

11. Pittsburgh Penguins (5): Evgeni Malkin might come back soon then we’ll get a real look at who this Penguins team is.

12. Vancouver Canucks (19): No idea if the Canucks are even close to being a playoff team, but they’re one of the most fun to watch every night.

13. Toronto Maple Leafs (7): Once Frederik Andersen started to drop off a bit, the Leafs were in trouble. They have plenty of talent and will probably turn things around but there’s a lot of questions.

14. Calgary Flames (11): It hasn’t been as hot a start as the Flames might hope, but there’s some signs of a competitive team there.

15. Arizona Coyotes (24): Coyotes are 6-1-1 in their last eight games and suddenly can score. Their roster has some potential, but it’s a question of if they can keep it up all season.

16. Tampa Bay Lightning (13): Not sure if it’s even a trend this early in the season, but the Lightning do not have nearly the same electricity as last season. Given how it ended last year, maybe some early challenges is a good thing.

17. Montreal Canadiens (12): Their power play getting going is one of the biggest positives for the Habs so far this season, who have shown some flashes of a fun offense in general.

18. Winnipeg Jets (15): Two regulation wins all season is bad but also they looked like a disaster and kind of aren’t, so that’s perhaps not horrible.

19. Florida Panthers (20): Boy, Sergei Bobrovsky has been rough so far.

20. Anaheim Ducks (16): If any team needs good goaltending its the Ducks and they have it.

21. Columbus Blue Jackets (22): Not the powerhouse potential like the end of last season, but maybe the Jackets aren’t as far off as originally thought before the season.

23. San Jose Sharks (17): If they had goaltending maybe they’d be in a better spot, but what’s burning the Sharks and no one is hiding the bad goaltending like a year ago.

24. Dallas Stars (23): It’s kind of baffling how much hope there was for the Stars to start the season and how atrocious they’ve looked, even after gaining a few points.

25. Chicago Blackhawks (26): Should probably get used to the Blackhawks in the high-20s every week.

26. New York Rangers (27): It’s early and there’s a ceiling there for the Rangers but efforts like Sunday’s against the Bruins aren’t going to get them anywhere.

27. Detroit Red Wings (25): Every week when writing the power rankings I miss a team and it’s always Detroit and takes a minute to remember them so that says all you need to know about the Red Wings.

28. Los Angeles Kings (28): At some point, the Kings are going to need to try someone other than Jonathan Quick between the pipes before too much season is gone.

30. Minnesota Wild (31): They started beating some other bad teams but it would take an, ahem, Wild turnaround for Minnesota to have an impact in the league this season.

31. New Jersey Devils (29): Jack Hughes is real it turns out but there’s literally no other positives about the Devils in the early going.