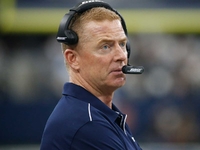 A season that spun from seeming Super Bowl contention to playoff hopes squandered has marked the end of Jason Garrett’s run leading the Cowboys.

After days of meetings, speculation and news of no news, the Cowboys are moving on without the second-longest-tenured coach in franchise history.

“We are extremely grateful to Jason Garrett for his more than 20 years of service to the Dallas Cowboys as a player, assistant coach and head coach,” said Cowboys owner and general manager Jerry Jones in a statement released Sunday. “His level of commitment, character and dedication to this organization has been outstanding at every stage of his career. In his nine full years as a head coach, he guided our team to three division championships while also having them in position to play for the NFC East title in the last game of the year in four other seasons. His tenure of leadership will be characterized by his ability to produce teams that always played with great effort, emotion and passion, and he represented our organization with great pride, loyalty and respect.

“Jason Garrett’s legacy with the Dallas Cowboys will always be that of someone who strived for greatness every day that he walked through the door, and as someone who instilled the virtues of enthusiasm, hard work and appreciation for the profession in all of the men who played with him and for him.”

“He is, and always will remain, a cherished member of the Dallas Cowboys family, and his contributions to the organization are greatly appreciated.”

While Garrett’s ousting isn’t terribly surprising, how long it took after the conclusion of the regular season was an unpredictable turn that elongated Dallas’ season-long soap opera.

Though rumblings of Garrett’s dismissal have carried on since the season ended, the finality of the situation didn’t come until a week after the Cowboys‘ last game of the season and midway through the rival Eagles‘ NFC Wild Card Game against the Seahawks.

The two sides will part after a long marriage that began with Garrett as a backup quarterback for seven of his eight NFL seasons from 1993-1999. From there, Garrett joined the coaching ranks as Dallas’ offensive coordinator under Wade Phillips in 2007. He remained in that capacity until 2010, when he replaced Phillips as interim coach after a 1-7 start. Since then, Garrett compiled an 85-67 record as the Cowboys coach, including a victory over the rival Redskins in the 2019 finale that ended the tumultuous campaign on a winning note.

It was far too little to keep Garrett, though, as the Cowboys concluded a season that played out week by week in the headlines, with Dallas brimming with talent but struggling to find consistency or wins against decent competition.

At one point, the Cowboys were 3-0 and clicking on all cylinders, but a pair of three-game losing streaks firmly entrenched Garrett in the hot seat as the season slipped away game by game.

Fittingly, the 53-year-old Garrett’s run ends after an 8-8 campaign — the fourth of his tenure. The Cowboys made the playoffs just three times under Garrett, losing in the NFC Divisional Round all three instances. Their last NFC Championship berth remains 1995 — when the team last won the Super Bowl with Garrett on the roster as a player.

The Cowboys‘ offense — which boasts four Pro Bowlers in running back Ezekiel Elliott, center Travis Frederick, guard Zack Martin and tackle Tyron Smith — was second in the NFL in total yards, but continually came up short when it mattered most. Against teams who finished above .500 this year, Dallas was just 2-6, as it struggled in particular down the stretch with five losses in seven weeks ahead of the finale wresting away their grip on the NFC East. The Eagles, in turn, finished the season with four consecutive wins to take the division.

Quite simply the team was stockpiled with high-profile talent in addition to the aforementioned Pro Bowlers, such as quarterback Dak Prescott, receivers Amari Cooper and Michael Gallup, unretired tight end Jason Witten, linebacker Jaylon Smith, pass rushers DeMarcus Lawrence, Robert Quinn and on and on.

But the 2019 season’s storyline was all too familiar. Potential and star players in the Lone Star State didn’t equate to true success, as the glory years of the 1990s — and decades prior — grew to be more distant.

As he leaves the Cowboys, Garrett does so as the longest-tenured coach in team chronicle since its first coach, legendary Hall of Famer Tom Landry. Unfortunately for the now former coach and the ‘Boys, similar success to that achieved by Landry was never found.

As the decade moves on, it ends as the only one in Cowboys franchise history in which the team made the playoffs three or fewer times, per NFL Research.

The Jason Garrett era has ended and the Cowboys are moving on to another head coach to lead one of sports’ most high-profile franchises.