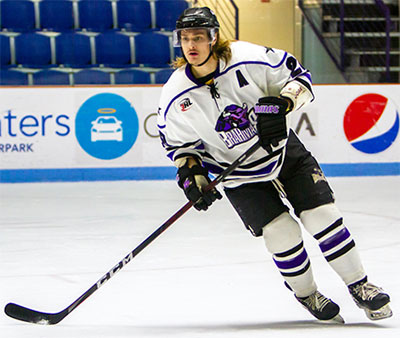 Leevi Selanne has played for the Texas Brahmas in the NA3HL the past two seasons, which has also resulted in an NCAA commitment.

One wouldn’t think North Richland Hills, Texas would be the kind of place where junior hockey players hone their craft before embarking on the collegiate and pro careers. Nor would one think that legends of the National Hockey League would be sending their sons to North Richland Hills to find the footsteps to follow that might lead them to legendary careers of their own.

The landscape has changed from professional hockey to junior hockey, but the winning has not. The NAHL Brahmas won their first league title in 2017, and the 3HL Brahmas won their first title in 2019. The 3HL Brahmas are technically still reigning champions of their league, as last season was cut short due to covid, and no champion was crowned. Were champions to have been crowned in 2020, both Brahma teams would have been the front runners to win their league titles, as both teams had the best regular-season records in their leagues.

Not much has changed in the 2020-21 season. The 3HL Brahmas steamrolled through the regular season dropping only five games. After a sweep in the first round of the playoffs, the 3HL Brahmas have won 10 consecutive playoff games while only allowing nine goals in the process.

The main reason why both of these teams have been so strong is top-notch coaching and recruiting under the watchful eye of head coaches Dan Wildfong (NAHL) and Ryan Anderson (NA3HL). Wildfong has been with the Brahmas since 2007 as their head coach and is now closing in on 700 wins. Anderson has been racking up wins in rapid succession while having less than a dozen losses under his belt in his two seasons behind the bench.

With leaders like this and a culture of winning well-established, it is no shock that legends of the NHL want their kids to come to hone their craft in North Richland Hills. Legends like Teemu Selanne, who is widely regarded as the greatest Finnish hockey player of all time.  Selanne’s son, Leevi, has been a member of the 3HL Brahmas for the past two seasons. Leevi’s point production has been very reminiscent of his father’s as he has indeed averaged more than a point game in nearly 100 contests. Also on the 3HL Brahmas is Alec Secord, son of Chicago Blackhawk legend Al Secord. During his heyday in the 1980s, Al Secord was one of the most feared men in the NHL. Never backing down from a fight, Secord threw hands with some of the titans of the sport like Bob Probert. Al Secord also scored 54 goals in the 82/83 season.  Al’s son Alec is now in his first year with the Brahmas. Alec has provided a steady presence on the blue line as a defenseman. Alec had two assists in the first two games of the playoffs this year and is hoping to keep the momentum going as the 3HL Brahmas look to defend and repeat their 2019 title.

For the NAHL Brahmas, the theme for the upcoming Robertson Cup Playoffs will be “Unfinished Business” as the 2019-2020 season was also cut short due to the COVID-19 pandemic. That season the team was on pace to have the best record in franchise history, as well as watching the franchise records for shutouts in a season (11) broken by goaltender Caiden Bailey.

The NAHL Brahmas, under the leadership of Dan Wildfong and owners Frank and Sal Trazzera, have become known across the Junior Hockey landscape as the place to play if your goal is to get a Division I NCAA Scholarship. Since the 2013-2014 season, the Brahmas have seen over 100 players committed to play NCAA hockey, three players have been drafted into the National Hockey League, and there are over a dozen players now active in professional leagues around the world. Success on and off the ice will always attract top-end talent. Talent like Quinn Emerson will suit up for Bowling Green University next season. The very same university that his father, Nelson Emerson, played for prior to embarking on an NHL career which lasted over 750 games. Nelson was a force at Bowling Green collecting over 250 points during his four years there. With Coach Wildfong’s instruction, Quinn might follow in his father’s footsteps with an equally as dominant collegiate career en route to a professional career.