August 12, 2020
Trending
Home NHL Brad Marchand upset with NHL staff after being taken out of game following a hit and an intermission – CBS Sports 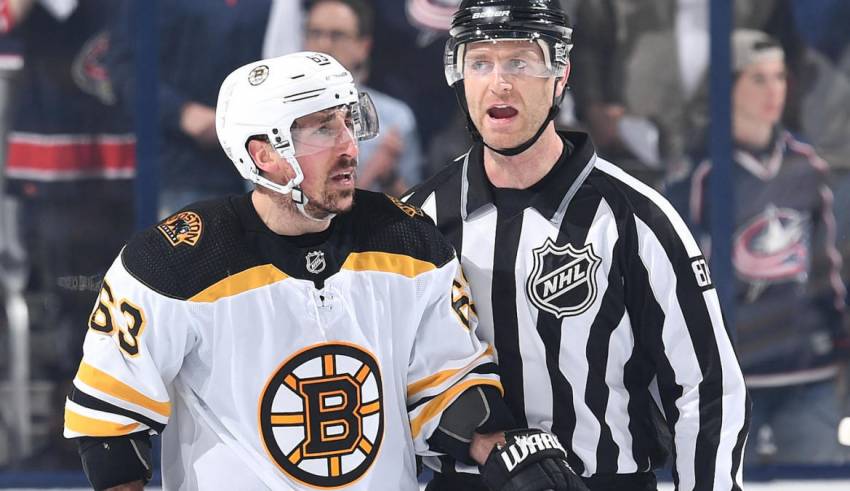 Brad Marchand and the Boston Bruins walked away with an overtime win over the New York Rangers at the TD Garden on Friday, but the winger was far from all smiles in the locker room following the game. After taking a hit to the jaw while skating into Jacob Trouba, with 27 seconds left in second period, Marchand was taken out of the game after some felt he looked a little shaken up.

He was on the bench to start the third period and after going out on to the ice, a concussion spotter pulled him at 18:24, which lead Marchand to smash his stick in anger.

During the post game locker room interviews, No. 63 did not hold back about how he felt the play was seen. He was upset at the NHL staff and said:

“Guys up there [in the press box] busy eating pizza and cheeseburgers and can’t watch the game. Maybe next time, pull his head out of his butt and watch the game.”

Marchand recalled that he skated into Trouba’s elbow and said he was fine, adding that an NHL staffer held him out until the middle of the third period.

When asked if he got an explanation he responded, “No. Guy’s sleeping out there.”

He called the whole thing poorly timed. “That’s embarrassing. I mean, they had 30 minutes, 20 minutes to sit there and review the tape and call that in, but they made me come out in a 2-1 game as we’re starting to get momentum,” he said.

Bruins Coach Bruce Cassidy also did not appreciate how it all went down. “I thought it was fairly evident when he got hit, and they decided to do it at the start of the third. I don’t know why they wouldn’t do it between periods. There’s an 18-minute intermission,” he said. “I didn’t like the timing of it at all.”

With 18 goals on the season so far, Marchand is tied for second in the NHL in that category.

The win extended the Bruins win streak to six games and keeps them in first place in the Eastern Conference with a record of 18-3-5. The Rangers now stand at 12-9-3 on the year.

The Bruins will face the Montreal Canadiens on Sunday.