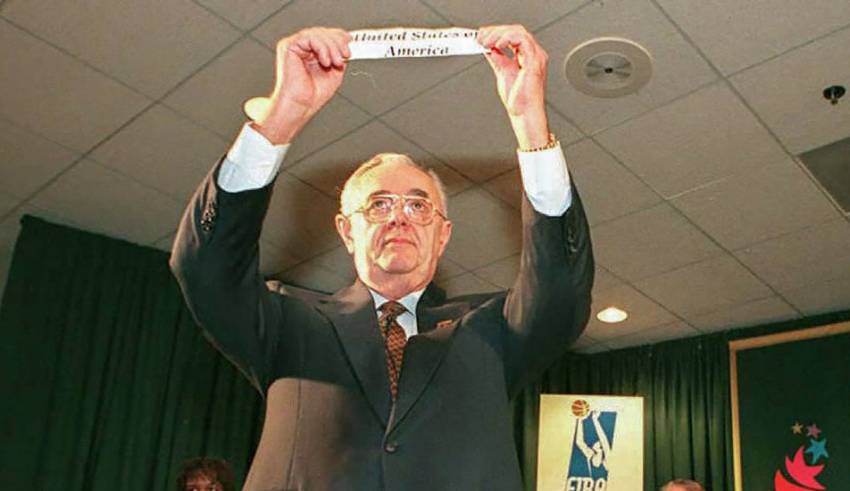 Boris Stankovic, the longtime head of basketball’s worldwide governing body and a driving force in the fight to allow N.B.A. players to participate in the Olympics, died on Friday in Belgrade, Serbia. He was 94.

His death was announced by the International Basketball Federation, or FIBA. He was its secretary general from 1976 to 2002.

Mr. Stankovic was a well-regarded player and coach in the former Yugoslavia. Yet he was best known for his long, successful crusade to open up Olympic men’s basketball to professional players, a step that ushered the sport into its modern era and led to the emergence of the “Dream Team,” a collection of American stars who became a global phenomenon.

The campaign was initially turned back in 1986, when FIBA’s member nations, in a 31-27 vote, rejected a proposal to let professionals play in the Olympics and in basketball’s quadrennial world championship.

But the effort succeeded three years later and went into effect starting with the 1992 Summer Games in Barcelona, Spain, where Michael Jordan, Magic Johnson, Larry Bird and Charles Barkley led the Dream Team to a gold medal. In 1994, pros from the United States played in the world championships for the first time, in Toronto.

“It is nonsense to have 200 million players in the world as FIBA members but not the 300 best players,” Mr. Stankovic said in 1987.

Jack McCallum, the author of “Dream Team: How Michael, Magic, Larry, Charles, and the Greatest Team of All Time Conquered the World and Changed the Game of Basketball Forever” (2013), said in a phone interview, “Without Boris, there never would have been a Dream Team.”

The National Basketball Association had virtually no relationship with FIBA when Mr. Stankovic requested a meeting with the N.B.A.’s commissioner at the time, David Stern, in the mid-1980s, during the latter years of the Cold War.

“His goal was very much to unify the world of basketball,” Russ Granik, a former N.B.A. deputy commissioner, said of Mr. Stankovic in a phone interview.

The meeting prompted discussions that led to the first McDonald’s Open in 1987, when the Milwaukee Bucks, Tracer Milano of Italy and the Soviet Union’s national team held a three-team round robin in Milwaukee sponsored by that fast-food chain. The tournament was expanded the next year to a four-team round robin in Spain, featuring the Boston Celtics, Scavolini Pesaro of Italy, Yugoslavia’s national team and Real Madrid, the host team.

Mr. Stankovic told N.B.A. officials about his vision of having the best players in the world participate in major FIBA events, Mr. Granik said. “It wasn’t ready to happen yet,” he said, “but he wanted to start working toward that.”

He added, “We were kind of surprised by all this, coming from him, because we’d always been told that they don’t want N.B.A. players in their events — they want to keep their world separate.”

In April 1989, by a vote of 56-13, FIBA ratified the proposal to allow professionals from the around the globe to participate in tournaments previously restricted to amateurs.

“We see this as our triumphant entry into the 21st century,” Mr. Stankovic said at the time.

Mr. Granik said that N.B.A. officials had not — as some critics contend to this day — privately urged Mr. Stankovic to change the rules in the wake of the United States’s uncharacteristic failure to win gold or even silver with a team of collegians at the Seoul Olympics in South Korea in 1988.

“It was nothing that David and I lobbied for,” Mr. Granik said, referring to Mr. Stern, who died in January. “People don’t believe that now, but we were very, very ambivalent about it at the time.”

In pushing to embrace professionals, Mr. Stankovic had not only been seeking to raise the level of FIBA play globally and legitimize his organization; he had also hoped to ensure that European stars — who would soon start migrating to the N.B.A. — would continue to be eligible to represent their countries on the international stage.

Mr. Divac, now general manager of the Sacramento Kings, called Mr. Stankovic “a pioneer for basketball in Yugoslavia, and he was a father figure for all of the players.”

Borislav Stankovic was born on July 9, 1925, in Bihac, a Bosnian city in the former Yugoslavia. He studied veterinary medicine at the University of Belgrade.

As a player, he helped Red Star Belgrade win two national titles and was selected to play for the national team 36 times, including in FIBA’s inaugural world championship, in 1950, in Argentina.

As a coach, Mr. Stankovic won four league titles in Yugoslavia and another in Italy before his appointment as FIBA’s vice-secretary general in 1960.

He became a full-time basketball administrator in 1966, leaving behind his second career as an inspector for meat and dairy control. He was promoted to deputy secretary general of FIBA in 1972 and to secretary general in 1976 after spending some time in the United States to study the American game.

Mr. Stankovic succeeded Renato William Jones of Britain, a FIBA founder (in 1932) and its first secretary general. Mr. Stankovic was inducted into the Basketball Hall of Fame in Springfield, Mass., in 1991.

His survivors include a daughter, two granddaughters and two great-grandchildren.

Mr. Stankovic was occasionally described in American basketball circles as the European equivalent to Mr. Stern. But the comparison was inexact.

“It wasn’t like being a sports commissioner in the United States, where you had a great deal of control,” Mr. Granik said. “Everything he could get done had to be done in a totally political environment, involving not just a couple dozen owners but dozens and dozens of countries.”