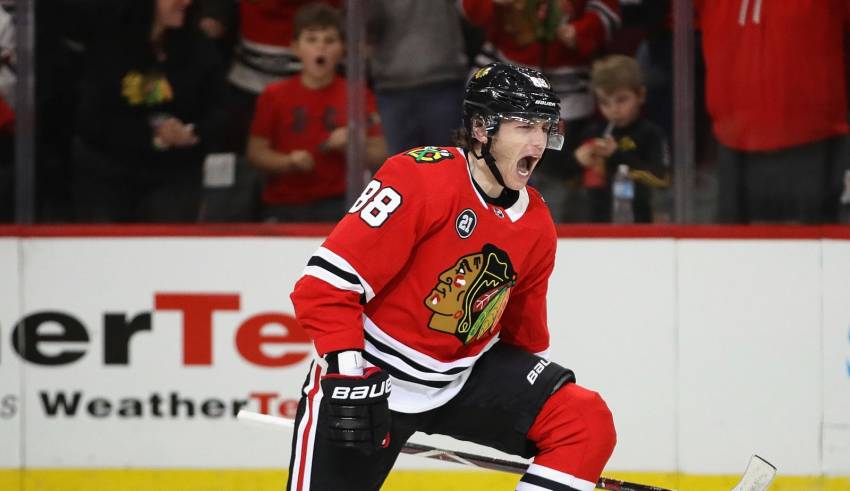 Since 2007, Chicago Blackhawks’ forward, Patrick Kane, has been lighting up the NHL. Throughout his 921 career games, he’s put up 961 career points. He currently ranks 96th all-time.

Patrick Kane has had a well-documented career. He won three Stanley Cups with the Chicago Blackhawks and he has played with some of the best players in Blackhawks’ history. Kane has also won various awards throughout his 13-year career. During that time, he has been the one making history.

Kane scored his 900th point last year in February against his hometown team, the Buffalo Sabres, in Buffalo. He grew up a Sabres fan with his father having season tickets. Kane’s favorite player as a kid was Pat Lafontaine, and he is currently on pace to beat Lafontaine’s 1,013 career points towards the end of this season.

There are only seven active players ahead of him in points. That is pretty cool as a Chicago Blackhawks’ fan.  We are witnessing more history game-by-game. Kane very-well could move up to 95th by the end of next week, needing only five points to pass Maurice Richard.

Since the start of the season, Patrick Kane has moved from 103rd to 96th on the NHL all-time scoring list. Only seven active players have scored more points the Kane. pic.twitter.com/f3Kiz60Ppl

Still, it seems like Patrick Kane is an underappreciated player with casual fans. Sidney Crosby and Connor McDavid are considered the two best players in hockey right now.

More from Blackhawk Up

Kane doesn’t get talked about much anymore, as the success of the Blackhawks has declined since 2017. Kane was ranked in the top 100 greatest players in NHL history back in 2017.

At 30, Patrick Kane is a little closer to the end of his career, but he also has a lot left in the tank. The younger stars like Kirby Dach, Alex DeBrincat, and Dylan Strome are helping Jonathan Toews and Kane move the team in the right direction. There’s no telling what this team is capable of.

Kane still is in the prime of his career and is hungry for another cup run. This team is starting to get things together following a 5-3 win Wednesday against the Golden Knights.

The Chicago Blackhawks have won three of their last four games. Kane is also riding a seven-game point streak. This team is fairly young and we should all be excited about the future. Let’s see if the Kane and the Blackhawks can build on their momentum and make a push for the playoffs.