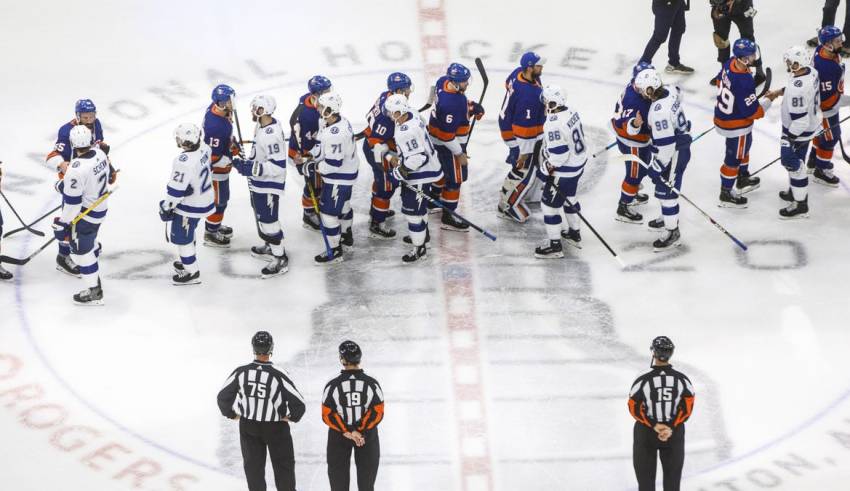 In his annual pre-Stanley Cup Final news conference, Bettman said Saturday there is still too much uncertainty to know what that season will look like. He wouldn’t address speculation about an all-Canadian division given the U.S.-Canada border closure to nonessential travel.

Deputy commissioner Bill Daly said the focus would remain on the safety for players, coaches, staff and fans.

“If there’s an option to consider, believe me, we’re considering it,” Bettman said.

The league has repeatedly said opening training camps Nov. 17 and beginning the season Dec. 1 were tentative targets. Bettman raised the possibility of the season starting later in December or in January.

Asked about potentially not playing until the fall of 2021, Bettman anticipates a full, 82-game season and playoffs.

“How and when we do that is something that we don’t all have enough information to make any decisions,” Bettman said.

The U.S.-Canada border is a significant issue and has more of an effect on the NHL than other pro sports leagues because it has seven teams in Canada and 24 in the U.S. until Seattle is set to become the 32nd franchise in 2021. Canada did not allow Major League Baseball’s Blue Jays to play in Toronto this season because of cross-border travel.

Daly said the league can wait a certain amount of time until fans might be allowed in arenas. Bettman added, “How we start doesn’t necessarily relate to how we’re going to finish” and raised the possibility of starting without fans and evolving from there.

The league has held its entire, expanded 24-team playoffs in quarantined bubbles without fans in Toronto and Edmonton. Bettman said more than 30,000 COVID-19 tests have been done in that time with zero positive coronavirus test results.