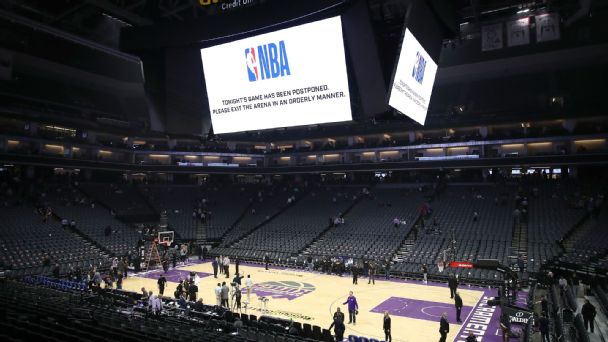 WORD SPREAD QUICKLY among the Toronto Raptors: Did you hear? Gobert has it. Donovan Mitchell, too. See? Right here on Twitter. The defending NBA champions quickly realized what was coming: Their final basketball game came just two days earlier on March 9 against the Utah Jazz. They would be quarantined.

But what did that mean? Where was the coronavirus reference manual? Kyle Lowry, so meticulous in his basketball preparation, wanted parameters. His teammates called asking why the team facility was closed. Almost immediately, players began reaching out for training programs and workout equipment, but coach Nick Nurse emphatically ordered them to pump the brakes.

“My initial message was pretty heavily hammering the idea of, ‘Stay in the house. Don’t take chances. Basketball can wait,'” Nurse said.

Raptors forward Pascal Siakam, in the middle of a magical All-Star season, didn’t like that answer. He was particularly agitated when Nurse explained he could not have any contact during the 14-day quarantine period — not even with his brother Christian, a former college basketball player who is Siakam’s roommate, workout partner, manager and constant companion.

“Pascal was struggling with it,” Nurse said. “He’s saying to me, ‘What do you mean I can’t see my brother? We do everything together.’ I said, ‘No, dude. You have to stay away for now. You just played Rudy Gobert.'”

The NBA announced that due to the ongoing coronavirus pandemic, the 2019-20 season would be suspended effective March 12.

In the initial days of the NBA shutdown, Nurse regularly jumped on the phone with big man Marc Gasol and assistant coach Sergio Scariolo. Gasol’s parents were on lockdown in Spain while Scariolo’s mother was in Italy, two of the most infected countries in the world. Nurse tried to assist them in reaching health officials in those countries to assure their families were safe, and to try to facilitate food deliveries and medical needs.

“That concerned me a lot more than making sure guys have bikes and weights,” Nurse said.

NBA coaches are rooted in habit. From Oct. 16 to mid-June, they know exactly what city they will be in, exactly what time they will arrive and exactly how long they will stay. They will interact with a core of basketball assistants, staff members and a finite number of players on their roster in accordance with a schedule that rarely, if ever, wavers. It is a controlled environment that suits the personalities of precise tacticians whose livelihoods hinge on a detailed master plan.

Now, with no blueprint, no schedule, no timeline, coaches are dealing with the confusion and the unknown of the coronavirus landscape in a variety of ways. Each strives to maintain the delicate balance of respecting the seriousness of the virus while regularly engaging with his players in hopes of preserving — or even enhancing — the unity that is the lifeblood of successful teams. It is, the coaches say, a unique challenge without precedent.

“The whole world is canceled,” Los Angeles Lakers coach Frank Vogel said. “It’s a human dynamic none of us ever witnessed.”

WHEN VOGEL WAS most recently on the court, his team had ripped off 11 wins in 13 games, spanked its in-house rival, systematically dispatched potential Finals foes in the Milwaukee Bucks, Philadelphia 76ers and Boston Celtics before losing a closely contested affair against the Brooklyn Nets on March 10.

After four Nets players tested positive for COVID-19, the Lakers were immediately tested and placed in a 14-day quarantine and only emerged on Tuesday. In the wake of Detroit Pistons big man Christian Wood‘s positive test result being reported against his wishes and before he could notify his mother, the Lakers have kept confidential the names of two players who tested positive.

“I don’t even know who are they,” Vogel said, “and I’m totally fine with that.”

During his quarantine, Vogel said he has purposefully shifted his mindset. “I’ve mentally flipped my seasons,” Vogel explained. “I’m in the summer now. I really feel it’s necessary for us to mentally decompress. It’s a better mindset than trying to power through this. If we sprint through what could potentially be a two- to three-month break, with workouts and meetings and projects and film throughout, will we be fresh when it matters?

“We need to realize ‘when it matters’ could be July or August.”

The 10-part Michael Jordan documentary “The Last Dance” will debut on April 19 at 9 p.m. ET on ESPN.

During the stoppage, Vogel has imparted this same message to all of his players, including LeBron James, who has been diligently working with longtime trainer Mike Mancias during the shutdown.

“If you follow him on social media, you’ll see he’s working out like a madman,” Vogel said. “But LeBron knows what he’s doing. His workouts are mostly for body maintenance, which is what we’re looking for with our guys right now.”

Vogel, his staff and his players are two days removed from their quarantine but are just the latest team to navigate an unstructured time normally filled with intense playoff races. Detroit, Utah, Toronto, Boston, Brooklyn, Oklahoma City, Cleveland, New York and Philadelphia were also sequestered. As social distancing guidelines continue to be extended, a number of the league’s coaches are dealing with uncertainty for how to stay prepared — or even when to start considering it.

IN EARLY MARCH, just before the coronavirus was officially declared a pandemic, many coaches identified that their most pressing issue was combating their players’ sense of invincibility. For example, Gobert playfully touched every recorder and microphone in his reach just days before learning he’d contracted COVID-19. Washington Wizards coach Scott Brooks said it became his full-time job to educate players about, and remind them of, the dangers of the virus.

“Our guys are young, they’re in great shape, they have a lot of money, and they have nothing to do,” Brooks said. “It could have been a recipe for disaster.”

That required Brooks to stress to his players that washing hands religiously really was the best way to be vigilant, that sharing workout equipment in this environment was a horrible idea, and — before bars were shuttered and large gatherings prohibited — that partying with friends or dancing in a crowded nightclub had to stop.

Among the many things these coaches have learned as pickup games were outlawed and in-person training sessions were banned is that sometimes the only reasonable option is to hit the pause button. And, when you do, it might be surprised at how the mind regenerates.

When the NBA shutdown went into effect, Phoenix Suns coach Monty Williams hopped in his car and drove 14 hours from Phoenix to his San Antonio home, where he hunkered down with his family. While he takes great pains to remain engaged with his team, Williams has cherished the time with his new wife, her son and his two young boys.

“It’s been a gift,” he said. “As much as I want to get back to playing and coaching, I’m old enough to know when you get time off, you take advantage of it.”

Williams has long been a fan of billionaire Bill Gates, who has pledged to donate most of his fortune to charity. He was thrilled when his All-Star, Devin Booker, donated $100,000 to coronavirus relief funds in the Phoenix area, and has shared the documentary “The Mind of Bill Gates” with his players and staff during the shutdown.

“I like the way Bill Gates looks at things,” Williams said. “He believes this [pandemic] is bigger than economics or politics or certainly basketball. He views it as an opportunity to serve each other and help one another. He’s pushing the envelope for giving, and that’s a great message for our players.”

Dallas Mavericks coach Rick Carlisle said he’s utilized the free time to dive deep into the internet, unearthing everything from unique drills that match a certain skill set for a player to motivational speeches from military leaders. The respite, he said, has proved to be a time of self-reflection.

“We’re creative like everybody else,” Carlisle said. “Our entire staff is continually working on projects. You have to view this time as a rare opportunity during this historically unusual pause to study your team, and to channel your energy positively for your family, your profession and for this world that is in crisis.”

Last week, iconic baseball manager Tony La Russa sent Carlisle a story on Lt. Colonel Hal Moore. Dropped by U.S. helicopters along with 250 men in la Drang Valley during the Vietnam War, Moore was immediately surrounded by 2,000 North Vietnamese soldiers. His valor during the ensuing battle eventually forced the North Vietnamese to retreat. Carlisle shared the traits of Moore’s leadership — swift decision-making, leading from the front, taking responsibility for his actions — with his coaching staff.

Just as players do, coaches have been texting throughout the shutdown. Williams has exchanged messages with Gregg Popovich, Nate McMillan, Doc Rivers, Brett Brown and Billy Donovan. The universal theme has been gratitude for the unexpected bonus of experiencing a “normal” existence in the middle of March.

Brooks is waiting out the shutdown in California with his wife and two grown children. “I can’t remember the last time we had family dinners,” Brooks said, “and now we have one every night.”

WHEN COACHES CONNECT with their players, they keep it light and vary content. Brooks has been pushing yoga. Williams sends team drills, but sprinkles in videos of his 9-year-old Micah and his 12-year-old Elijah dunking on lowered baskets.

Most coaches report they have made use of Zoom for online training and video conferencing, along with group drills that can be done individually in the home. Brooks said the Wizards patch in with multiple players so they can engage in an online training session together, but have the technology to allow players to individually tailor the workout with their own choice of music.

The Wizards had won only 24 games when the NBA suspended play on March 11, but Bradley Beal was on a tear, averaging 30.5 points (second only to league leader James Harden) and 6.1 assists a game. He’s chomping to get back, Brooks reports, but it’s the coach’s responsibility at the moment to balance the intensity to play with the larger forces the world is navigating.

“We were four to five games out [of the final playoff spot in the East] with 18 to go,” Brooks said. “We still had hope. But all of that has to take a back seat. This is uncharted territory and we need to make decisions that are so much bigger than basketball right now. Even if we were one game out, I’d say the same thing.”

When Vogel was first hired by the Lakers, he was viewed as a third choice who would be under pressure to produce immediately or assistant — and former Bucks head coach — Jason Kidd would slide in. That narrative seems eons ago now. Vogel is a bona fide Coach of the Year candidate who had his team playing as well as anyone in the league. But, just like that, all that accrued momentum is on hold. The timing, he admits, has been difficult.

“Where was this [stoppage] two years ago when I was losing 80% of my games in Orlando?” Vogel said wistfully.

It remains to be seen which of the varied approaches teams have implemented during this layoff will prove to be the most advantageous. And while the physical distance from the players has been trying for coaches, technology ensures communication can be immediate.

Just a few days ago, Nurse FaceTimed with Siakam, who is no longer quarantined and has been happily reunited with his brother.

Siakam gleefully panned to an area outside his home to reveal his brand-new purchase — an outdoor basketball hoop he ordered online, so he can resume his regular one-on-one games with Christian, and a shred of a basketball lifeline that remains shrouded in uncertainty.