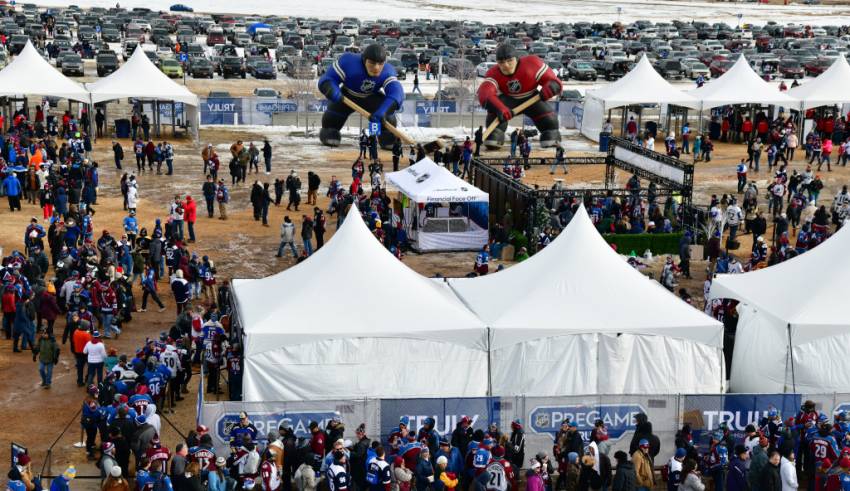 The following statement was emailed to The Denver Post after a request was made to comment on Saturday’s traffic jams, long concession/bathroom lines, parking issues and other problems associated with the NHL Stadium Series event at Falcon Stadium.

“Like at any AF event, we will study what went well and what didn’t. Some immediate thoughts here were (to) have more concessions vendors to hopefully create less long lines.

“Multiple efforts were made by the NHL and Air Force Academy to warn attendees about potential traffic delays getting to the sold-out Stadium Series game yesterday. In addition to web posts leading up to the game, the NHL alerted the more than 43,000 fans who had purchased tickets about the need to allow plenty of time in traveling to Falcon Stadium on game day. As well, in the week leading up to the game, the NHL through numerous media interviews reminded fans about the need to plan their travel based on anticipated delays.

“To mitigate the anticipated traffic congestion, the Academy opened at 5:30 a.m. and eliminated vehicle ID checks at 12:30 p.m. — 5 1/2 hours before the game. We thank the many fans who took advantage of that window to arrive well in advance and enjoy the Fan Fest activities that started at 1 p.m. Because of this early planning, the vast majority of fans were able to get to the stadium prior to the puck drop and had an amazing experience at the game.

“Unfortunately, several factors the day of the game came together to cause even greater than expected traffic delays. Unlike many large sports venues, all traffic into the two gates at the Air Force Academy comes from one interstate. Closures, emergency repairs and multiple accidents along that I-25 corridor made the traffic situation worse in the hours leading up to the game and unfortunately impacted some fans traveling to the game.

“While we regret the negative experience of some fans, most were able to enjoy a fantastic evening with multiple flyovers and musical performances that highlighted the competitive spirit of the NHL, the history and culture of the Academy, and the milestone achievements of USA Hockey.”

When asked specifically about the ride-share program in which fans said was not available after the game, Garnhart wrote: “We have been told by security forces that ride shares were allowed at all times. So I don’t know if some made individual decisions not to pick up or what, but they were allowed in all evening.”