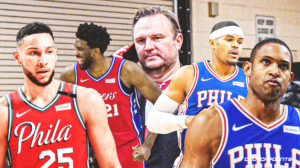 NBA commissioner Adam Silver has delivered the latest statement with regards to the stalemate between the Board of Governors and the NBPA.

Silver and the league office–with the loss of revenue in mind– have been pushing for a pre-Christmas start date to the 2020-21 season, while the NBPA has been leaning on a MLK Day start date.

According to ESPN’s Adrian Wojnarowski, the league office held calls with general managers on Monday, informing them that there’s been no headway made in deciding an official start date for the NBA season. As a result of the stalling talks, Silver has given his input on the situation as the days carry on without a decision.

Sources: On the chances of getting an agreement for a Dec. 22 start to season — with training camps presumably needing to start within a month — Commissioner Adam Silver told teams today: “We’re running out of time.” https://t.co/07J7KKMy2y

While there is much to be achieved in talks before the season can resume, it appears that the two parties haven’t gotten a foot in the door in terms of progression. Along with the target date for the season, both the NBA and NBPA are also far apart in terms of the new CBA agreement, which poses a threat to salaries due to the loss of revenue projected for the 2020-21 campaign.

Adam Silver was initially in favor of a MLK Day start date, but the recent spiking of COVID-19 cases left him and company to believe that avoiding the steady threat of the pandemic was inevitable for the time being. With fans likely not being allowed in arenas once more for the new season, Silver saw no obstacles that would prevent a pre-Christmas start to the season.

For NBA players, starting the new season only two months after the conclusion of the 2019-20 season is much too soon for a turnaround, given the recouping most athletes require in a standard offseason.