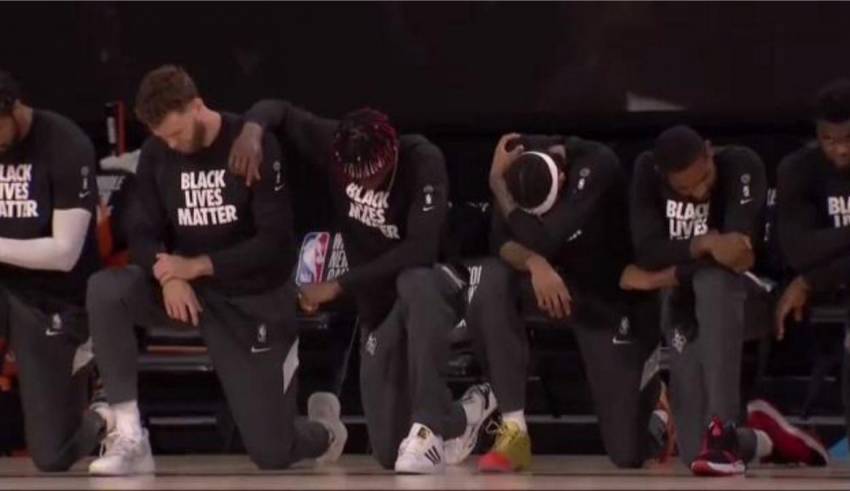 Watch Now:
Tiki and Tierney: Antonio Daniels talks Zion Williamson being the face of the NBA
(2:15)

It has been discussed for months, an inevitability in light of the death of George Floyd at the hands of Minneapolis police and the protests that followed. On Thursday, it became a reality: the New Orleans Pelicans and Utah Jazz, the two first teams to take the floor with the NBA season restarting, kneeled during the national anthem as a form of silent protest against racial inequality in this country. They were joined by their coaches and the game’s officials.

Players wore shirts that read Black Lives Matter as the pre-recorded anthem by Jon Batiste played on the video screens in Orlando. The anthem did not include lyrics. Coaches wore social justice messages on their polos.

The Lakers and Clippers followed suit in their game.

The Pelicans released a statement following the anthem about their commitment to social justice.

“The New Orleans Pelicans stand by the ideals of freedom of speech and the right to peacefully protest. Collectively with the Utah Jazz, our organization joins the NBA in supporting our players and coaches. To promote meaningful change relative to social justice and racial equality, the New Orleans Pelicans have partnered with our players, staff and coaches to create a Social Justice Leadership Alliance committed to furthering the discussion, listening and learning and taking action to make positive change in our community and our country.”

The Jazz released a similar statement focused on their organizational belief in allowing players to express themselves.

“The Utah Jazz are committed to advancing social justice and stand in support of the players, coaches and staff as they exercise their first amendment rights, and use their voices, their experiences, and their platforms to peacefully express themselves. We are a values-based organization and believe in the foundational principles of justice, equality, fairness, and economic empowerment. Our organization strives to be a unifying force in our communities, and we hope this time in our history can be a catalyst for positive change in a country we love.”

No players knelt for the anthem in 2017 when the phenomenon was at its peak in the NFL. The NBA technically has a rule on its books prohibiting players from kneeling for the national anthem. Commissioner Adam Silver confirmed that he will not enforce that rule, though, due to the unique circumstances surrounding this game and moment in history. “I respect our teams’ unified act of peaceful protest for social justice and under these unique circumstances will not enforce our long-standing rule requiring standing during the playing of our national anthem,” Silver said, according to Yahoo Sports’ Chris Haynes.

Players around the league have taken up the cause of fighting for social justice in the United States. The NBA has taken steps to help them do so, such as allowing them to wear approved social justice messages on the backs of their jerseys. But the fact remains, there were players that were not comfortable with the idea of returning to the court at all in light of the movement that has swept the nation. Playing, some of them argued, would distract from the movement. Even after the union agreed to restart the season, many of those players are fighting for more diversity at the highest levels of leadership in basketball.

Those efforts are still in their early stages, but many of the players who ultimately did decide to finish the season in Orlando did so with the idea that the stage basketball provides would give them a chance to spread awareness of these issues. The prominence of the words “Black Lives Matter,” both on the court and other warmup shirts, help those efforts. So does kneeling. Thursday’s actions will only be the beginning as players try to make the most of the platform they have in Orlando.