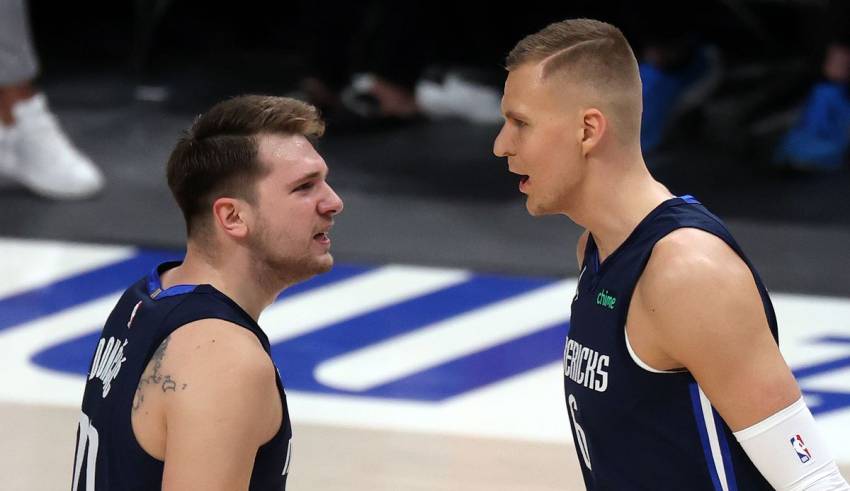 Which version of Kristaps Porzingis will we see?

It’s time for the Mavs to figure out what they have in Porzingis. In 2019, they signed him to a five-year $158 million deal to be the second cornerstone piece of their franchise along with Luka Doncic. At the time, it was the largest deal in franchise history and their future brimmed with the hope of having two of the best backcourt and frontcourt players in the NBA.

Fast forward to 2021, and the Mavs are stuck in neutral. They have enjoyed regular-season success riding Luka Donicic to 40+ wins a season over the last two years, but can’t seem to enjoy similar success in the postseason. After holding a 2-0 lead in last year’s first-round series, they lost four of their final five games as the Clippers advanced to the next round.

Do you remember that miraculous run the 2011 Mavericks team went on to defeat Miami’s big three in the Finals? Well, that was their last playoff series win. They haven’t won a series in over ten years, and now that they have the pieces to do so in their post-Nowitzki era, the pressure is on.

You can’t play a whole lot better than Luka Doncic has in the regular and postseason. He is willing his team to victory every night, but he needs a battery mate to pick up the slack at times. Porzingis would appear to be that guy, but he has been riddled with injuries that have facilitated his inconsistent performances.

In last year’s playoffs, he averaged 13 points, 5.4 rebounds, and 1 assist on 47% from the field and 29% from three. That series went seven games, which is the most playoff action he has ever seen, and you have to think if he just shot better in one of those games, Dallas advances.

Dallas will need to see much more consistent play out of him to break their playoff losing streak but health will be his main concern. If Porzingis is healthy, he will average 20+ points throughout the season, and that will get him into a grove heading towards the playoffs. He’s not your typical big man who stays in the paint and posts up. He is married to the three-point line so he needs to obtain shooting consistency as they make their playoff push.

Will their offseason moves pay off?

Memphis made a fairly shocking trade to some this offseason sending their second-best player in Jonas Valanciunas to the Pelicans for the 10th overall pick in this year’s draft along with other pieces. They gained Steven Adams in the deal and that 10th overall pick turned out to be Ziaire Williams. This is a move with upside potential but if not executed correctly it could be a step back.

Steven Adams has been a real solid player for the majority of his eight-year career, but last season was his worst since 2015. He will always be a brick wall in the middle, but he is a traditional center in the age of positionless players. He’s never been the greatest offensive threat so he can’t stretch the floor so they are banking on him being a force inside. In my opinion, Valanciunas was that force inside plus he can stretch the floor if you need him to. Although Morant is their best player, Valanciunas was a massive reason they were even in the postseason thanks to his 23 point, 23 rebound performance against the Spurs in the play-in game.

The reason they made this move was for Ziaire Williams. Effective wings might be the most coveted position in the game right now and Memphis targeted their guy at 10th overall in the draft. At 6’9” he’s an athletic, lanky wing who has the potential to be a great 3&D prospect. He’s shifty, has good speed and burst, so Memphis loved what they saw in Williams but will he prove his draft worth?

He’s actually in a good position to do so but it will be up to him to put in the work. Memphis is a deeper and more talented team than some may think, so his playing time may be a bit limited to begin with. If they can insert a productive Ziaire Williams into their starting five, they will have five very solid starting pieces and a chance to win a playoff series.

Memphis is building their franchise with the foundation of their draft picks which is a lovable but risky proposition. They give away a talented, proven center in Valanciunas to go and draft and young, talented wing. If Ziaire can reach his potential it catapults Memphis into a dangerous team, but if he does not, they revert back to missing the postseason.

Where will their shooting come from?

The San Antonio Spurs are usually a very effective offensive team. They may not be the highest scoring, but they are effective in converting open looks. That becomes increasingly more difficult as their best scorer DeMar DeRozan left for Chicago.

Gregg Popovich is the NBA’s version of Bill Belichick. It doesn’t matter what type of talent is on the team, Pop will find a way to maximize everybody’s ability within that season. He’s already done a great job with their young pieces in Derrick White, Dejounte Murray, and Keldon Johnson, but they still do not have that star player just yet.

With that being said, they need to rely on team basketball and everybody to star in their role but they have some new faces to ingratiate into the offense this year. They signed Doug McDermott in free agency and drafted Josh Primo with their top pick and Joe Wieskamp with their second. McDermott showed with the Pacers he could be an effective role player, but so far he has not lived up to his 2014 draft hype. Primo and Wieskamp profile to be great pieces with Popovich as the head coach, but Pop needs his rookies to prove themselves before they gain any real action on the hardwood.

Like I said before, we are used to the Spurs having effective team shooting but that was not the case last year. They ranked last in three-pointers made and attempted and positioned themselves 20th in the NBA in points per game at 111. Their scheme will always keep them in every game, but when it is time to separate themselves in the fourth quarter do they have that guy or group of pieces to carry them to the finish line?

There are 3 people I will never bet against. Bill Belichick, Tom Brady, and Gregg Popovich. If anyone can turn a seemingly mediocre roster into a playoff team it is him, in fact, he did it just last season leading that team to the play-in game. They still have a bitter taste in their mouth from their loss to Memphis in that game, so it is likely San Antonio will come with a renewed vigor this season and possibly a new and improved shooting stroke.

Can they beat the good AND bad teams?

I know that seems like a silly question but this Pelicans team is a mystery. If you look at this team on paper it doesn’t make sense as to why they are so disappointing. Brandon Ingram is one of the more talented scorers in the game right now and Zion is a generational player. They have the talent but that is not translating to wins. It must be incredibly frustrating to be a Pelicans fan. You watch your team put up 131 points in a win against the eventual champion Milwaukee Bucks and then turn around and lose to a terrible Rockets team.

Maybe their offseason additions will help in that regard. They added Devonte’ Graham and Jonas Valanciunas while drafting Trey Murphy lll and Herb Jones. These are nice pieces that help bolster their roster on paper but what will this team look like when the adversity hits? Willie Green will have a hand in that as he was named their new head coach after parting ways with Stan Van Gundy.

This team needs an identity. A true foundation they can stand and rely upon throughout the season so they can avoid these inconsistent performances. Their identity will most likely focus on the offensive end because that’s where their talent lies, but if Green can bring some stability to the defensive end, New Orleans could have some solid groundwork brewing towards the future.

Which could be the largest issue: winning or losing games?

It sounds strange but for a lottery team like the Rockets, this is a topic of discussion. If they lose games it’s bad for the culture, morale, and player development, but they maintain their position as one of the top lottery teams for next year’s top draft pick. On the other hand, If they start winning games that may take them out of lottery contention and into the abyss because they won’t win enough to make the postseason.

The main question here is will they tank? They have some good young pieces in Jalen Green, Kevin Porter Jr., and Christian Wood, so you don’t want to see their game digress along with the team’s overall success. With that being said, it would benefit their future to obtain a top draft pick next year because this team is gearing towards the future. They are not in win-now mode nor anywhere close to it, so they can afford to flush a season away in hopes of attaining the best player in future drafts.

Is that the right thing to do? I don’t think so but I do see and understand both sides. I realize they want to fill their roster with young talent in future drafts but they need to set a culture in the post-Harden era. The players will notice if the front office is looking to tank and that decision will translate into the motivation players have to enhance their game. Sure, there are many players who are self-motivated and exclude external influences, but others need to see a standard and follow it in order to mold their games.

I think players like Eric Gordon and DJ Augustin could play a crucial role in the development of Houston’s young talent. These are veteran players who have seen the many highs and lows the game has to offer, and they understand what it takes to be successful amid adversity. If Houston’s young guys can truly absorb all that basketball intellect, they could be back in basketball’s spotlight sooner than some expect.