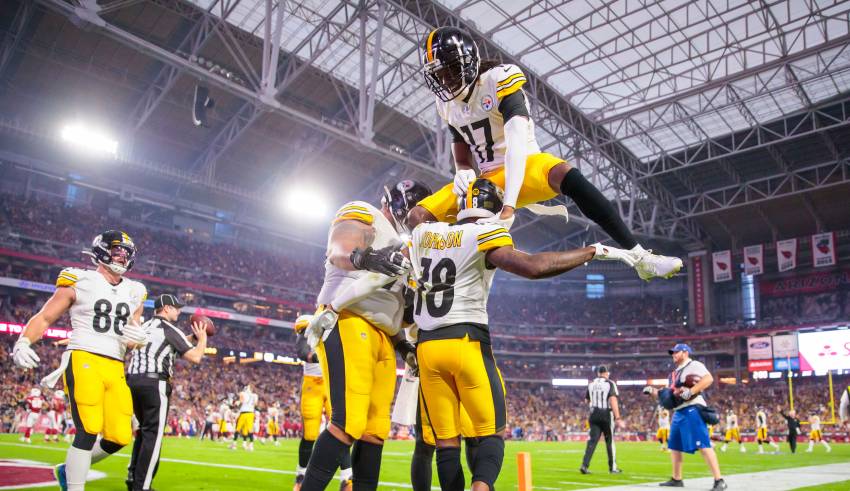 1. Nice Sunday for the Baltimore Ravens, who became the first AFC team to sew up a postseason ticket for 2019 thanks to a hard-fought win at Buffalo. Currently on track to claim home-field advantage, the Ravens are riding a franchise-best nine-game winning streak and have already set a team record for most points (409) in their 24-season history. Oh, and the Patriots lost, reinforcing the Ravens’ perch atop the AFC standings.

2. New England saw its 21-game win streak at Gillette Stadium go by the boards in a 23-16 defeat to the Chiefs, who have won two of their last three visits to Foxborough.

2a. The Patriots are now 0-3 this season against the AFC’s other division leaders (Baltimore, Houston, Kansas City).

2c. New England allowed 61 points in its first eight games. But the Pats have been burned for 107 in their past five, three of those losses. Maybe not a surprise they were booed off the field at halftime by the home crowd.

3a. Just a bit more impressive given a good chunk of the Chiefs’ game equipment somehow began the day in New Jersey. The situation nearly created a potential forfeit, per ESPN, but everything showed up in the locker room about two hours before kickoff.

4. Baltimore’s Lamar Jackson joined Michael Vick as the only quarterbacks to rush for 1,000 yards in a season. Jackson needs 23 more to break Vick’s single-season record for the position (1,039 yards in 2006).

5. Reminder that the first player the Ravens selected in the 2018 NFL draft wasn’t Jackson. It was TE Hayden Hurst, who’s been far less productive in his two seasons than third-rounder Mark Andrews, another product of that draft. But Hurst had the biggest game of his NFL career Sunday, catching a 61-yard TD from Jackson on his way to a career-best 73 receiving yards.

6. If last week’s Ravens-49ers showdown earned national acclaim, perhaps as the preferred Super Bowl LIV preview, was Sunday’s 49ers-Saints throwdown the contest we want repeated in the NFC’s championship round? Robbie Gould’s 30-yard field goal at the gun provided the final trio of the game’s 94 points, capping a 48-46 Niners win.

7. If a prospective rematch goes down in NorCal, maybe the defenses will even show up. San Francisco entered the weekend with the league’s top-ranked D but got torched for more points, yards (465) and first downs (28) than it had been in any other game this season. New Orleans’ eighth-ranked unit also had its worst showing, ceding 516 yards.

7a. Sunday sure didn’t help defensive player of the year candidates Nick Bosa and Cam Jordan, who each finished with two tackles but nary a sack.

7b. Saints S Marcus Williams infamously gave up the “Minneapolis Miracle” TD to end the 2017 season for New Orleans. Sunday, he latched onto 49ers TE George Kittle’s facemask, setting up Gould’s game-winning shot. Might be we need to get Williams off the field at the end of games?

8a. Tom Brady threw his 536th career TD Sunday … but probably would have had more if the zebras were paying closer to attention.

10. Despite wins Sunday, the Jets, Chargers and Buccaneers were eliminated from playoff contention. So were the Jaguars, Panthers and Redskins.

11. New Colts K Chase McLaughlin converted two FGs Sunday. It was the first time in a decade that someone other than Adam Vinatieri drilled a three-pointer for Indianapolis.

12. Jump on the #MyCauseMyCleats hashtag. It’s one of the coolest weeks on the NFL schedule.

13. QB Devlin “Duck” Hodges continues to not kill the Steelers, committing just two turnovers in his five appearances (four of them victories). Mason Rudolph was picked off nine times in nine games this year.

14. Weird stat of the week: After Hodges’ Steelers vanquished Kyler Murray’s Cardinals on Sunday, undrafted passers are 4-0 in 2019 against counterparts drafted first overall.

15. The Cardinals claim to have a #RedSea at home. Sure looked like a #BlackAndGoldSea on Sunday …

16. Is there a more underrated defender in the league than Vikings DE Danielle Hunter, who had three sacks Sunday — giving him 12½ on the season. At 25 years and 40 days old, he’s also the youngest player in league history with 50+ sacks.

17. Holy “Lamb-ardi” … Packers rookie coach Matt LaFleur is the first in franchise history to win 10 games in his debut campaign.

18. Tip of the cap to Carolina owner David Tepper, who’s revealing the type of culture he wants to imbue within his franchise. His firing of longtime coach Ron Rivera was the right (and classy) move given Tepper had already determined he was going to take the franchise in a new direction following the season. It’s also better for the Panthers, now able to jump-start their search for Rivera’s successor.

19a. Dallas is now 0-6 this season against teams who currently have winning records.

19c. Our national obsession with who will “win” the NFC East resembles our fascination with predicting which will be the final teams to make the NCAA tournament basketball field. Which is to say … who cares? How likely is it the Cowboys or Eagles are going to handle the Seahawks or 49ers on wild-card weekend?

20. Then again … Any Given Sunday? Per Elias Sports Bureau, Dallas’ +67 point differential is the second best in NFL history for a team with a losing record after 13 games. Conversely, entering Sunday night, Seattle’s +36 differential is the lowest ever enjoyed by a team with a 10-2 record. So maybe we should root for a rematch of last year’s wild-card battle, won by the Cowboys 24-22.

21. Speaking of Any Given Sunday, the Broncos led the Texans 38-3 in the third quarter before Houston reeled off 21 unanswered to make the result quasi-cosmetic. But if the Texans take it to the Patriots, then get whupped in that same yard by Denver … then the Broncos are championship-caliber by virtue of the transitive property, right? (Definitely not … just … Any Given Sunday … and another PSA for the folly of betting on NFL games.)

21a. In a revenge game no one talked about, Broncos DB Kareem Jackson — he spent his first nine seasons in Houston — returned a fumble 70 yards for a TD against his ex-mates, staking Denver to a 14-0 lead it didn’t come close to relinquishing. He also made 11 tackles.

22. But let’s pump the brakes before we anoint Drew Lock as the long-awaited successor to John Elway. Er, Peyton Manning. Er, John Elway … probably depends on whether you grew up in Denver or not. Granted, nice day for Lock, the first rookie in league history to compile 300 passing yards and three TD passes in his first road start. But fair warning for those of you who have gone down the Kyle Allen or Gardnew Minshew rabbit holes in 2019. It’s a lot easier to ambush opponents who don’t have NFL film to study.

23. The Titans might have a nice set of triplets on their hands in QB Ryan Tannehill, RB Derrick Henry and WR A.J. Brown. Only problem? Brown, a rookie, is the only one currently under contract for 2020.

23a. Still, assuming they can crack the AFC field, Tennessee now looks like the team you don’t want to see in the wild-card round … and with two games left against the Texans, the Titans control their fate. They’re now 6-1 and averaging 31.4 points since Tannehill replaced Marcus Mariota.

24a. The Browns have won three in a row over their in-state rivals after the Bengals had taken the previous seven outcomes.

25. But Cleveland QB Baker Mayfield probably suffered another public relations — dare we say, team relations — loss, suggesting after the game that WR Odell Beckham Jr.’s sports hernia “was not handled the right way in our training room.” Ouch. Usually not a bad idea to try and cover for a teammate … but not when it means flaming your athletic trainers. Mayfield later tweeted, “My intentions were not to throw our medical staff under the bus. No I don’t know all the facts about Odell’s injury. It was emotionally answered because I can sense his frustration and I care about my team and putting us in the best position to win.” Sigh.

27. Hello, Olamide Zaccheaus. The Falcons receiver hauled in a 93-yard TD Sunday, the longest in league history on a player’s first career catch.

28. The Dolphins were 0-for-6 in the red zone Sunday, and K Jason Sanders accounted for all 21 of their points with seven field goals (one shy of the single-game mark). Wasn’t enough in a 22-21 loss to the slightly-less-lowly Jets.

29. In case you hadn’t thought about Lionel “Little Train” James in a minute, he was the last Chargers player with 100 yards both rushing and receiving in a game (back in 1985) … until Austin Ekeler pulled it off Sunday.

30. Heads-up play of the day? Bills CB Tre’Davious White (literally) scooping up intel on the Ravens in windy Buffalo.

31. Coaching call of the day? The Jaguars calling for a (successful) fake punt while trailing 31-3 in the third quarter. It did eventually lead to a touchdown, but still. Hilarious.

31a. Jacksonville has lost five in a row by a collective 117 points.

32. Congrats to Buccaneers QB Ryan Griffin. Amazingly, he’s a six-year NFL vet but hadn’t played in a regular-season game until Sunday. He completed two of four passes for 18 yards. Hopefully that’s enough to finally qualify for a varsity letter.