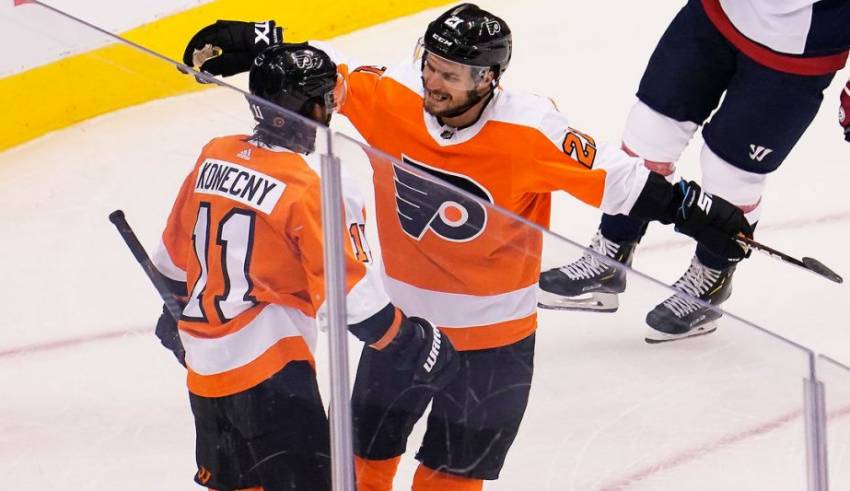 The Flyers have earned at least a point against every Eastern Conference team this season except one:

On Saturday at Scotiabank Arena, the Flyers will meet Tampa Bay in what has become the East’s round-robin championship of the NHL’s return-to-play 24-team tournament.

In the round-robin fight for top seeding, the Flyers have set themselves up well with a 4-1 victory over the Bruins and a 3-1 decision over the Capitals.

“I think it’s just important to play the right way and keep building on this momentum we’re gaining right now,” Sean Couturier said in a video interview Thursday night after the Flyers’ win over Washington. “We want to win, we want to finish the highest possible seed, but I think as long as we’re at our best once the real playoffs start, that’s the biggest thing.”

What’s on the line?

The winner of the game will earn the Eastern Conference’s No. 1 seed in the first round of the playoffs, while the loser will settle for the No. 2 seed.

Both seeds are obviously advantageous, but there’s certainly a difference between them. The No. 1 seed will hold home-ice advantage throughout the playoffs. With no fans, that distinction still holds importance because home teams are awarded the last line change in games, which can be critical to matchups when outcomes are in the balance.

Below are the current round-robin standings:

Who could Flyers play in 1st round?

Given they will finish with either one of the East’s top two seeds, the Flyers cannot face the fifth-seeded Penguins or sixth-seeded Hurricanes in the first round.

It’s still possible the Flyers can face the No. 7 Islanders, No. 8 Maple Leafs, No. 9 Blue Jackets, No. 10 Panthers or No. 12 Canadiens in the first round.

Here’s the latest on the best-of-five qualifying series:

When are final round-robin games?

The Flyers-Lightning round-robin game is Saturday but the start time is TBD. We’ll know the time of puck drop at some point Friday.

The Capitals and Bruins finish the round robin Sunday (start time TBD).

The first round of the playoffs is scheduled to begin next Tuesday.

How do Flyers fare vs. Lightning?

Among the round-robin teams, the second-seeded Lightning were the club that gave the Flyers the most trouble in the regular season. The Flyers dropped two games in regulation to Tampa Bay – albeit one was a 1-0 defeat and the other was a chippy 5-3 loss with an empty-netter during the final 22 seconds.

The Lightning can flat-out score, putting up a league-best 3.47 goals per game during the regular season.

However, the Flyers hung with Tampa Bay in other statistical categories and didn’t have trade deadline acquisitions Derek Grant or Nate Thompson during the two regular-season matchups.

• Flyers are making believers in round robin, pick up huge win for East seeding

• Feel good to be back? Despite possible injury, Flyers open tourney with a bang

• From lineups to big picture, everything Flyers fans need to know for round robin

• Can the Flyers go all the way? Our Stanley Cup predictions are here

• Potential heavyweight coaching matchup for Flyers in 1st round

• So, about those Penguins … 1st-round matchup for Flyers?

• Could Flyers still share the wealth against Blue Jackets in 1st round?

• Would Islanders be Flyers’ kryptonite if they meet in 1st round?

• Scott ‘couldn’t be happier’ with Flyers, but there’s more action to be done

• Trust the captain, he’ll know what to do if the Flyers face the Hurricanes

• Lindblom has new contract, his comeback is on with Flyers

• Flyers-Canadiens is perfect on paper, but would it be a trap?

• What round-robin schedule change could mean for Flyers’ strategy

• The Flyers’ lineup, practicing celebrations, no hiding these two and more

• A ‘dangerous card’ in the Flyers’ hand, Giroux still wows and more

• Who are the Flyers’ top 5 reinforcements for 24-team tournament?

• Flyers sign a player to extension at position of strength

• Flyers have two top 50 pending UFAs; will they re-sign them?