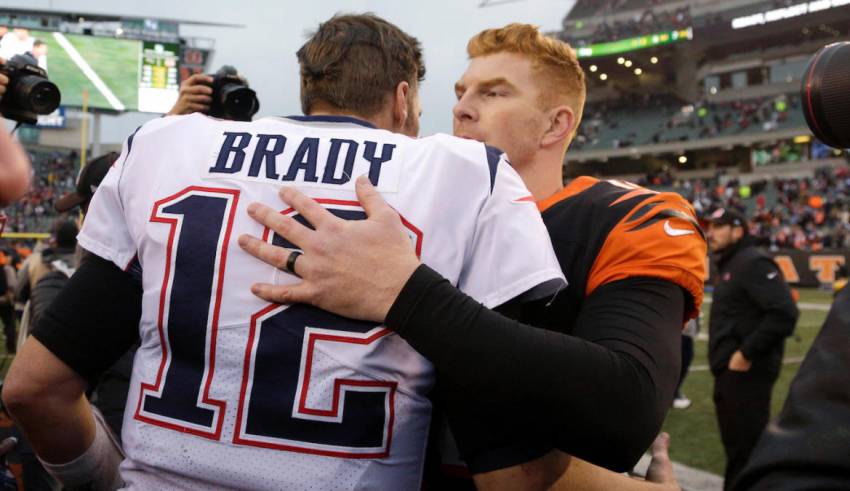 The NFL can be a strange place, but that’s part of what makes it so entertaining. The plot twists that are possible this offseason will shake the league to its very core, as future Hall of Fame quarterbacks hit free agency to join other franchise QBs looking for massive paydays, while others are simply trying to wiggle themselves free of a bad situation. The latter situation is one Andy Dalton finds himself entrenched in, with the Cincinnati Bengals expected to trade the three-time Pro Bowler.

Dalton will reportedly have say in where he lands, and his future might now be tied to that of Tom Brady, who has yet to make a decision on if he’ll remain with the New England Patriots. While Brady and the Patriots have had informal communication, they’ve yet to sit down and have an official visit to hammer out details of a potential re-signing, and the absence of such has created a maelstrom of rumors that stretch to even the most unimaginable of circumstances. If Brady does decide to walk away from the only NFL organization he’s ever known, it leaves the Patriots with a massive void to fill at the position.

And there is now a report that suggests, per Ian Rapoport of NFL Network, that head coach Bill Belichick and owner Robert Kraft may be willing to strike a deal with the Bengals to land Dalton — in the hopes of staving off the dreaded quarterback purgatory.

Considering the Patriots’ position in the first-round of the 2020 NFL Draft, namely having the 23rd-overall selection, it’s not unfeasible they’d look to bring in a veteran signal-caller who has at least proven he can win in the regular season. They’d have to trade up in a big way if they wanted to get their hands on one of the premier QB talents in this year’s draft class, and it’s unlikely — albeit not impossible — they’d entertain doing so. Dalton, who at one point had four consecutive winning seasons, would be far from the worst acquisition they could make, and Belichick’s prowess might be able to get the postseason monkey off of Dalton’s back.

It’s obviously not the Patriots’ first plan, and maybe not even their second, but it makes sense the idea would be floating around in their heads if Brady waves goodbye in 2020. They’d have competition to land his services though, because teams like the Chicago Bears and Indianapolis Colts also have interest, contingent upon where Philip Rivers lands.