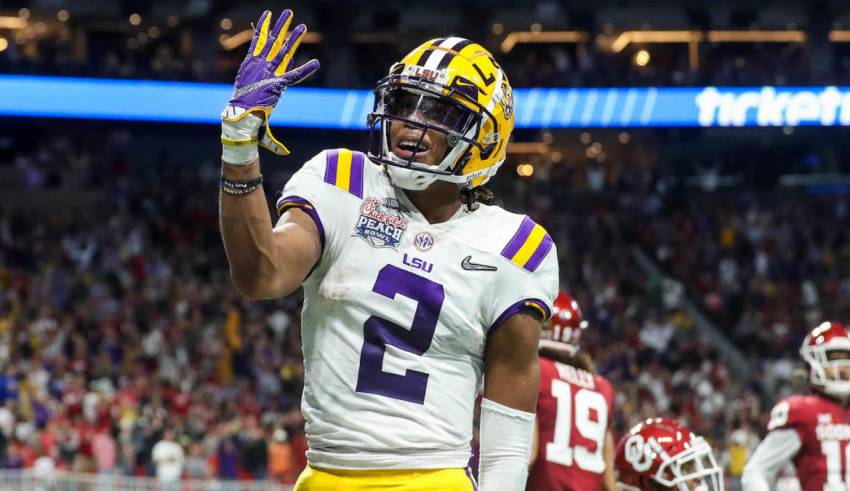 INDIANAPOLIS — The 2020 NFL combine is over. Pro days and private workouts remain before we all reconvene in Las Vegas on April 23 for the NFL Draft. When we do, many of the top performers in Indianapolis will have done enough to improve their stock, some even finding their way into Round 1 because of mind-blowing physical feats that took place inside Lucas Oil Stadium this past week.

Below, we’ll take a look at 10 players who had great combines and who will see that success reflected on draft night.

Jalen Hurts has been the forgotten man at the quarterback position, and through no fault of his own. He got off to a red-hot start for the Sooners in 2019, but he wasn’t nearly as prolific late in the season. With the emergence of Joe Burrow, and the strong Senior Bowl performances of Justin Herbert and Jordan Love, Hurts was lost in the mix. That changed at the combine, where Hurts ran a 4.59 40-time.

The issue was never Hurts’ athleticism, but his 40 time confirmed that he’s more than a bulldozer in the run game; he also has the speed and wiggle to run successfully in the NFL too. It’s that versatility that makes him so attractive at the next level. We talked about it last week at the combine:

Yes, we know, the Chiefs aren’t an ideal landing spot for a young quarterback looking for playing time, but the point remains: Hurts on, say, the Dolphins would be much more problematic than Hurts on the Patriots behind Tom Brady. And that brings us to the comparison between Hurts and Taysom Hill, who has enjoyed exactly that success in New Orleans’ offense.

The NFL combine is over, so who were the biggest winners and losers? Ryan Wilson joins Will Brinson to break it all down, size up the first post-combine mock draft and more. Listen below and be sure to subscribe for daily NFL goodness.

Is Hill a franchise quarterback? He thinks he’s capable, but the reality is that he’s not, at least at the moment. But he’s still valuable in Sean Payton’s offense because Hill can run, throw, catch and play on special teams. And while, like Hurts, he’s a former college quarterback, Hurts is a much better passer. And an ideal situation for Hurts would be to land in an established system that doesn’t need him to start as a rookie; instead, use him like the Saints use Hill and in a year — or even two — reevaluate his abilities as an NFL quarterback and go from there. There is no doubt Hurts can play in the NFL, but there has to be a plan in there to maximize his talents.

We LOVE Justin Jefferson. We loved him before the combine, but worried that he might test slower than NFL teams would like. Well, we spoke to him on the CBS Sports HQ set on Tuesday before he ran his 40 and he assured us he would “surprise a lot of people” with his 40 time. Jefferson blazed a 4.43 and that was after measuring 6-foot-1, 202 pounds.

This is where we remind you that Jefferson played primarily from the slot last season, where he was one of Joe Burrow’s favorite targets. We asked him about facing very little press coverage from the slot and he said he played outside early in his LSU career, where he regularly got off the line of scrimmage with little trouble.

For us, Jefferson came into the week as a second-rounder but he’s now firmly in the Round 1 conversation, and if he lands in a place like New Orleans or New England, look out.

It’s hard to believe that Taylor was often thought of as “the other running back in a really good class.” It wasn’t that he was being dismissed, just that it’s hard to keep your name in the headlines when you’re sharing the spotlight with Travis Etienne, D’Andre Swift, J.K. Dobbins, Zack Moss and Clyde Edwards-Helaire.

But Etienne returned to Clemson and none of the other running backs were able to replicate what Taylor did in Indy. Namely, he needed just 4.39 seconds to travel 40 yards. For some perspective, Saquon Barkley ran a 4.41 and they’re the only two running backs to weigh at least 225 pounds to go sub-4.45 at the combine since 2014.

Taylor may not be as fluid as Swift or Edwards-Helaire, but his top-end speed along with his vision puts him firmly in the conversation to be the first back off the board. There are questions about his pass-catching skills, but after hauling in just eight passes each in 2017 and 2018, Taylor had 26 receptions and five receiving touchdowns last season.

Coming into the combine Wirfs was one of our top-rated offensive linemen, in part because of his freakish athleticism. That was confirmed on numerous occasions last week. The Iowa right tackle (who can also seamlessly kick over to left tackle, by the way), ran a 4.85 40 (which led all offensive linemen), a 36.5 vertical (a combine record) and a 10-foot-1 broad jump (also a record). There’s also this:

Wirfs looks smooth in the O-line drills too, and he’ll be one of the first offensive linemen off the board in late April.

Becton measured 6-foot-7, 364 pounds in Indy, which is … ridiculous. And while he’s a mammoth of a man, he moves like someone who weighs 200 pounds. In fact, Becton told us that he can reverse-dunk — two-handed — with no problem right now. We do not doubt him. On the field, he ran the 40 in 5.1 seconds:

And Becton showed in position drills what anyone who watched him during the season already knew: He can move. Pay attention to the left tackle here:

There’s more! Becton has 17 percent body fat. This is one of the most athletic offensive line classes ever and there’s a good chance five — maybe even six — offensive linemen go in Round 1, and Becton will be among the first to hear his name called.

That was our initial response to Isaiah Simmons running a 4.39 40 time at the combine. A linebacker/safety hybrid who is 6-foot-4, 238 pounds, ran a 4.39 40. That is freakish. Which only makes sense when you hear Simmons say that he models his game after Tyrann Mathieu and Von Miller. We’d also add Derwin James, who somehow slipped to the middle of the first round back in 2018.

That will not be the case for Simmons, a top-10 talent who catapulted himself into the top-3 conversation in Indy. We love everything about his game — he can play linebacker, in the slot, off the edge and deep safety. We asked Joe Burrow at the combine about the biggest thing he had to worry about in the national title game. “Isaiah Simmons,” he said. “You have to know where he is on every single snap.”

This is where we remind you that Simmons was once a three-star recruit from Kansas who couldn’t believe Clemson was interested in him:

Henderson flew under the radar during the 2019 season, in part because the Gators weren’t in the national-title conversation down the stretch. But watch Henderson play and it quickly becomes clear that he’s a first-round talent. He showed up in Indy and ran a 4.39 40 — the same as Isaiah Simmons! — and that was after bench-pressing 225 pounds 20 times. And at 6-foot-1, 204 pounds, Henderson has prototypical size for a cover cornerback in today’s NFL. He excels in coverage; the elite speed we saw at the combine showed up on a weekly basis at Florida. If there’s one thing he needs to work on it’s tackling, but he’s undoubtedly a first-round talent. The only question is how high he’ll go.

The 2020 combine was all about freaky athletes showing their freaky athleticism and few players did that better than Neville Gallimore. We spoke to Gallimore before he ran and asked him if the rumors were true that he was going to best Quinnen Williams‘ 4.83 40-time at the 2019 combine. He smiled. A few days later, he was still smiling when he busted out a 4.79. Just to be clear: Gallimore is 6-foot-2, 304 pounds and he’s not just a straight-line sprinter. At Oklahoma, he used his rare combination of speed, power and quickness to routinely give offensive linemen fits, and his sideline-to-sideline range reminded us at times of Titans 2019 first-rounder Jeffrey Simmons.

Zuniga played in just five games last season because of injury, but his athleticism shone through at the combine. He measured 6-foot-3, 264 pounds and ran the 40 in 4.64. He also had a vertical of 33 inches, put up 225 pounds 29 times and his 10-foot-7 long jump was the best among all defensive linemen. Zuniga used both power and speed on the field, whether it was blowing up running plays or whipping offensive linemen to get after the quarterback. And while he’s far from a finished product, his physical gifts make him an intriguing prospect — and what Zuniga did in Indy will likely help his stock rise by a round or more.

Chinn didn’t play at a Power 5 school and he didn’t even play in a FBS program. The former Saluki was on the NFL radar heading into the 2019 season and parlayed his on-field talents into a Senior Bowl invite, and then a month later, showed up at the combine and showed out there too. The 6-foot-3, 221-pound safety ran an unofficial 4.46 40, bench-pressed 225 pounds 20 times, had a vertical of 41 inches and a broad jump of 11’6.” He could move closer to the line of scrimmage in the NFL because he’s such a sure tackler, but don’t sleep on his coverage skills either.

CBS Sports NFL Insider Jason La Canfora wrote before the combine that “multiple teams … have a late-first/early-second grade on him” after a strong Senior Bowl and he did nothing to hurt his draft stock in Indianapolis.